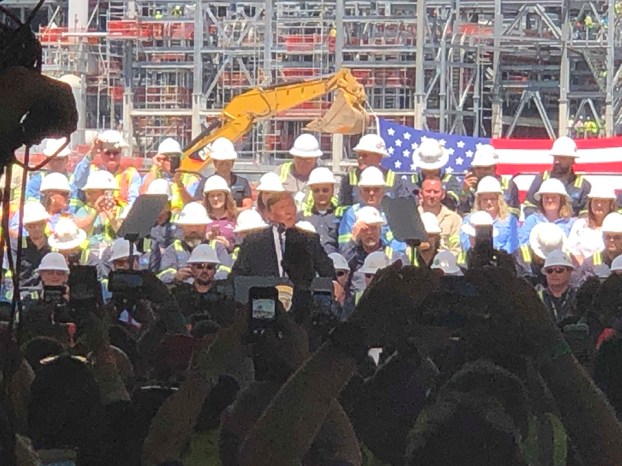 Before plant employees and his political supporters, Trump talked about the importance of energy to the nation.

“In Louisiana, Texas, New Mexico, Colorado, North Dakota, Pennsylvania and states all across our land, workers like you are lining up and powering our factories,” he said to the crowd. “You are not only making our nation wealthier, you are making America safer by building a future where America is energy independent. We don’t need anybody.”

Phase 1 of the Cameron LNG export project includes the first three liquefaction trains that they say will enable the export of about 12 million tonnes per annum of liquefied natural gas, or about 1.7 billion cubic feet per day.

The event doubled as a political rally for the president, who took time to denounce the news media seated in the back of the tent as “fake news” and spent time denouncing the Democratic hopefuls.

“I think we’re going to win it big,” he said. “I’m looking at the competition. You sort of dream about competition like that, but who knows. I got them all. I got Beto [O’ Rourke.] Beto is falling fast. About four weeks ago he said he was made for this. He was made to fall like a rock.”

“The Green New Deal is a hoax like the hoax I just went through,” Trump said. “I’m not sure but it might be a bigger one and mine was pretty big. It was unlimited.”

The crowd also heard from three current LNG employees about how important their job was to them. Two gave stories of hardship and job loss prior to employment at Cameron LNG, while one gave a testimony about how the company held her spot for eight months while she had treatments for breast cancer.

Trump credited his presidency with an energy resurgence.

“Without what we did, you could’ve never gotten this done,” he said. “It would’ve taken you many years. The result our efforts brought you a resurgence of the American energy production.

“This quarter, the United States produced record amounts of oil and natural gas. I will tell, they are not even close. Since the election, companies have invested half a trillion dollars in the U.S. energy industry and looks like it is going substantially up from there.”

Cameron LNG Phase 1 is one of five LNG export projects Sempra Energy is developing in North America. The other projects include Cameron LNG Phase 2, previously authorized by the Federal Energy Regulatory Commission (FERC), which could include up to two additional liquefaction trains and up to two additional LNG storage tanks; Port Arthur LNG, which recently was approved by FERC; and Energía Costa Azul (ECA) LNG Phase 1 and Phase 2 in Mexico.