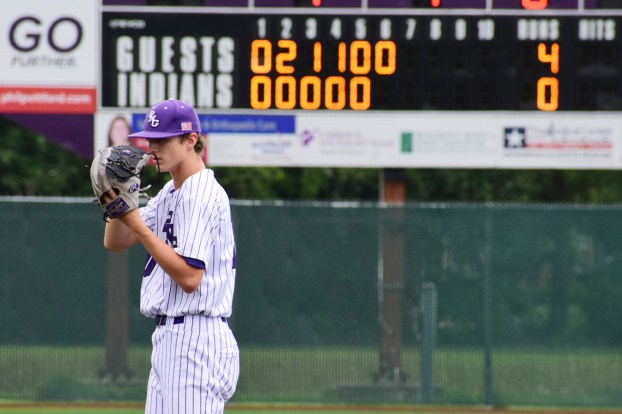 Grant Rogers of PNG takes a signal before a windup in the bottom of the sixth inning of Game 1 against Shadow Creek on Friday in Port Neches. PNG batted in the top of the sixth, although it played at home. (I.C. Murrell/The News) 5-10-19

PORT NECHES — That road trip to Crosby wasn’t necessary, after all. And it won’t be needed next week.

Port Neches-Groves’ and Nederland’s fan bases were treated to two-game sweeps in the Golden Triangle on Friday, although PNG fans nearly witnessed three games’ length for the price of one.

Reece Mancera landed a bases-loaded single in the 12th inning to give the Indians a 3-2 win over Shadow Creek, after PNG won Game 1 4-0 at The Reservation. Meanwhile, Nederland earned a 4-0, 3-0 sweep of Angleton at Bridge City’s recently completed Chuck Young Field.

Nederland (20-10-2) won both district meetings over PNG (20-13-1) in March and is back in the third round of the UIL playoff for the second straight year. PNG made it back for the first time since winning the 2017 5A state championship.

Both series were set to be neutral-site duels at The Ballparks in Crosby before heavy rains and high winds tortured much of greater Houston and Southeast Texas.

Crosby ISD canceled all classes and activities as a result Friday morning, leading PNG and Shadow Creek to settle on a doubleheader at The Reservation.

PNG’s Grant Rogers threw another gem in his home confines in Game 1. The senior threw only 81 pitches in 27 at-bats and held the Sharks to three hits while striking out five. It was the second straight complete-game win for Rogers in the playoffs.

PNG collected eight hits on offense. Khristian Curtis hit a solo home run on a full-count pitch with one out in the third inning to give the Indians a 3-0 advantage.

Ryan Sosa, Mancera and Blake Bost each had two hits for the Indians. Bost beat a throw to first to lead off the second inning and came home on a Mancera triple two at-bats later. Mancera then scored on a passed ball.

Sosa doubled in the fourth to tack on the Indians’ final run.

Dean Guidry had the other PNG hit, a first-inning single.

Shadow Creek (12-10-2), a Pearland-based high school in the Alvin ISD, posed a serious threat in the bottom of the sixth with bases loaded, but a flyout and groundout to shortstop quelled that. The Sharks left five on base and were caught stealing second base twice.

Braylon Shoaf went 2 for 3 and Benjamin Greer 1 for 3 for Shadow Creek. Sebastian Soliz allowed all PNG runs on seven hits, walking five and striking out five in five innings. Sabian Hernandez held the Indians to one hit and threw two strikeouts in the other two innings (seven at-bats).

Full statistics for Game 2 were not available.

The Bulldogs posted two runs in the second thanks to a walk by Landon Hiltz, singles by Omar Mascorro and Adam Roccaforte and sacrifices by Brock Holton and Wade Butler. In the fifth, Kamden Grant and Brian Davila singled, and Hiltz came up with a big double.

Zach Medart, Gavin Baird and Seth Cosme each had a hit for the Wildcats (22-7).

In Game 2, Holton produced a run with a flyout in Game 1 and drove in the second run with a groundout in the third. Mascorro hit a sac grounder in the fifth.

Roccaforte delivered two hits, while Chandler, Davila and Hiltz each had one.

Jacob Mares was credited with the win after fanning three and giving up three hits in five innings. Kemp started the game and allowed two first-inning hits and a strikeout, and Noah Gregory held the Wildcats to a hit on seven pitches in the seventh.

Ethan Ebner and Thomas Brannon each went 2 for 3, while Gavin Baird and Medart recorded one hit apiece for the Wildcats. Josh Hyatt struck out five and walked three in the loss.