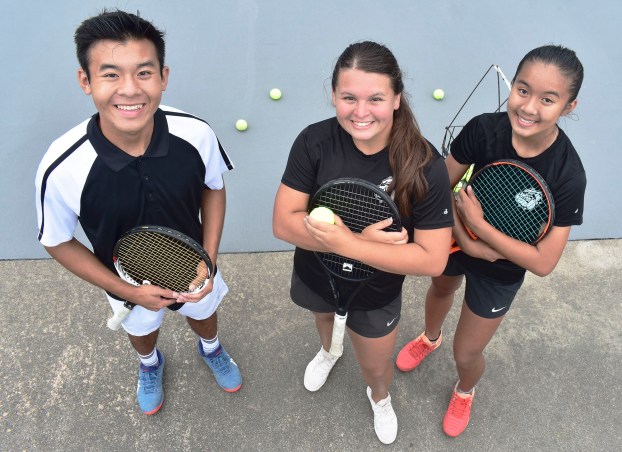 Junior Brandon Do, senior Jayci Wong and freshman Megan Do will represent Nederland in the 5A state tennis tournament at Texas A&M. (I.C. Murrell/The News) 5-7-19

TENNIS: Nederland’s Wong returns to 5A tourney with siblings

Brandon Do and Jayci Wong will rep Nederland in the 5A tennis tournament next Thursday and Friday at Texas A&M. Brandon's sister Megan is going as well. pic.twitter.com/VG761PDi5t

NEDERLAND — This time last year, Jayci Wong was missing from the UIL tennis tournament for the first time in her high school career.

She hasn’t forgotten the feeling.

“It was a big change in me, mentally, because I wanted to go so badly, and it was so heartbreaking not to be able to go,” Wong said. “Now, it motivates me more to do better and work harder.”

Wong’s empty feeling of not making a third consecutive trip as a junior has turned into the elation of going back to the 5A championship brackets as a senior, and she won’t be the only one donning Nederland gear.

Next week’s tournament at Texas A&M will be Wong’s first as a doubles player, as she teams with freshman Megan Do. The two won the 5A Region III championship in a three-set clash with Georgetown’s Elizabeth Dietlein and Kenna Schreiber on April 18 in Willis.

“It’s really cool to be in state as a freshman,” Megan said. “Coach [Jorge] Lopez has pushed us really hard to get to this point.”

Megan’s brother, junior Brandon Do, is going to state as a region champion as well.

The Dos’ first year at Nederland has turned out quite well. But Lopez, the Bulldogs’ 29th-year head coach, thinks there’s higher ground for them and Wong to reach.

“I tell them it’s a great opportunity to go even farther and not to be happy just with what they accomplished,” Lopez said. “You’ve always got to want one more. We’ve been working the last three weeks to get more. I know they do have a chance to make more history.”

Wong and the Dos made history by becoming the first from Nederland to win region titles in their respective disciplines. No other girls doubles team or boys singles player from the program had done so, although Lopez has had some players qualify for state in years past. Wong was a two-time 5A Region III runner-up in girls singles (2016, 2017) before finishing third last year.

Now, Brandon Do, who was third last year in 6A Region III playing for Fort Bend Travis, and the Wong-Megan Do pair are each three wins away from being state champions. The siblings have turned to Wong for advice on taking in the state experience.

“State is completely different from anything you’d ever expect,” Wong said. “Thousands of people are there, and it’s so overwhelming, but it’s so cool because everyone’s watching you, and it’s a really fun experience.”

“Since she’s older and a senior, I think [Wong] really wised me up a bit,” Brandon said.

Then again, Wong praises the way Brandon handles himself on the court.

“I just think he’s so humble when he plays, so it makes people want to watch him,” she said. “He’s gained a lot of fans, and it’s a really cool feeling when you do that.”

Megan has it great because she’s been learning from two examples, her brother and her doubles teammate.

“It’s really nice to have my brother because we’re able to hit with him, and he’s able to push us a bit harder,” Megan said.

5A STATE TRACK: Droddy seeks podium finish at 5A finals

Brittany Fruge has asked her star long jumper at Port Neches-Groves to not remind her of senior year. “Oh, my... read more