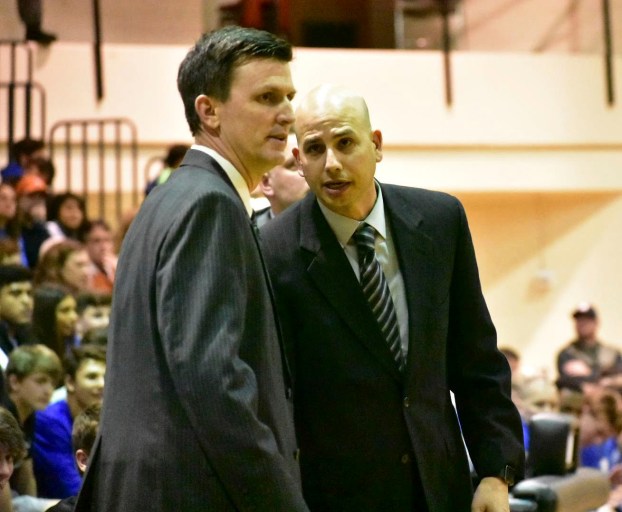 Chris Smith, right, assisted Brian English on Nederland’s boys basketball staff for the past decade and will take over as PNG’s head coach. (I.C. Murrell/The News) 1-18-19

Not only did Port Neches-Groves fill the vacant boys basketball head coach position in less than two weeks, the school didn’t have to look beyond Mid-County to find Pat Abel’s successor.

Nederland graduate and assistant coach Chris Smith will take over the Indians’ program after 14 years at his alma mater, the first four of which he spent as girls basketball head coach.

“I’m so excited,” Smith, 42, said Tuesday, shortly after PNG athletic director Brandon Faircloth told The News of the hire. “I’ve been waiting for an opportunity like this. I’m going to a great school district and I’m following a great coach like coach Abel. I’m looking forward to winning there.”

Abel stepped down from the position after 19 seasons but will remain a teacher at PNG.

“Nederland and PNG school districts are similar, and I just knew when coach Abel stepped down, it’d be a job I would want to have,” Smith said.

Faircloth said Smith has already been approved to fill the position, adding he fielded “quality applicants” but the experience Smith brings to PNG was attractive to the hiring committee.

“We interviewed some really good basketball coaches, but with his experience and knowledge of the game, we’re excited for him to be a PNG Indian,” Faircloth said.

Smith was an all-district basketball player at Nederland before his graduation in 1995. He earned a bachelor’s degree at Lamar University in 2001 and began his career as the Bulldogs’ girls basketball coach before moving into the boys basketball program under Brian English.

“I’ll try to get them on the schedule,” Smith said with a laugh.

English said Smith would do a great job with the Indians.

“He’s a good communicator and a good motivator,” English said. “He can relay that information to the kids. He’s done a great job for us, and we’ll miss him over here.”

Smith plans to build on the recent success of the Indians, who went 18-15 and earned the program’s first UIL playoff berth since 2013. The 18 wins, according to Abel, are the most in a season for a PNG boys team since the 1981-82 club won 25 games.

“We’re going to do our best and put our kids in position to be successful,” Smith said. “We hope to take [the success from 2018-19], roll with it and build on the success.”

Asked about his coaching philosophy, Smith responded: “We’re going to find out.”

BASEBALL: Against wind, Bulldogs move on

Down one game in a best-of-three series, Nederland went into what coach Bryan Spell called “a tough ballpark” at Galveston... read more