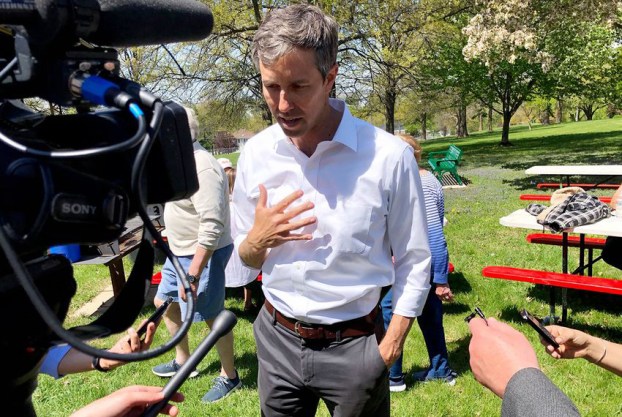 SHENANDOAH, Iowa — Beto O’Rourke, once resistant to going out of his way to discuss impeaching President Donald Trump, has grown more outspoken on the issue since the release of the Mueller report, a notable shift from his U.S. Senate campaign.

In that contest, U.S. Sen. Ted Cruz, R-Texas, relentlessly portrayed the then-El Paso congressman as a pro-impeachment crusader, part of a Democratic Party obsessed with stopping Trump. O’Rourke regularly disputed that characterization — including in the opening days of his 2020 bid — noting that he never brought up impeachment himself on the campaign trail and insisting that he was just candidly answering questions from voters and reporters. In response to those questions, O’Rourke would say that he had seen enough evidence to support impeaching Trump.

That approach changed after the release last month of special counsel Robert Mueller’s investigation into Russian interference in the 2016 election, which led some of his 2020 rivals — including fellow Texan Julián Castro — to suggest that the House initiate impeachment proceedings against Trump. Without any prompting from others, O’Rourke injected the issue into his remarks at a rally Friday in Fort Worth, one of multiple such instances in recent days.

“There must be consequences, there must be accountability and we must get behind the House of Representatives if they pursue impeachment,” O’Rourke said in one of his biggest applause lines of the rally. “And failing that, we must make this decision in November of 2020.”

The rhetoric was even a transformation from O’Rourke’s first reaction to the Mueller report, which was more deferential to lawmakers.

Asked about the shift here Sunday morning, O’Rourke acknowledged he used to discuss impeachment only when asked about it, and he indicated the Mueller report had given him cause to be more vocal on the stump.

“I spoke about it as something that we all need to be thinking about and asking our elected representatives about,” O’Rourke told reporters. “Because now there is the report that we have been waiting for. There is an ability to answer any outstanding questions about whether there was obstruction, about what the president attempted to do about the pattern of lies and cover-up, and [it’s] very clear to me that if there is not a consequence to that, we are saying to this and future generations that this kind of behavior is acceptable, and that cannot stand.”

Impeachment proceedings in the House, he added, would “ensure that more of these facts come to light, ensure that the Senate can make a very informed decision about the consequences for this president.”

O’Rourke suggested he was not troubled that his impeachment view was at odds with that of U.S. House Speaker Nancy Pelosi, D-Calif., who has expressed little interest in going that route.

“That’s fine,” O’Rourke told reporters. “I mean, we’re two different people, and [I] really respect the speaker and what she’s been able to do, but when asked my opinion, I’ve got to give my opinion and not anybody else’s.”

O’Rourke has been getting more impeachment questions on the campaign trail since the Mueller report release, and sure enough, after talking about it with reporters here Sunday morning, an audience member asked him about it at his next stop, which was in Red Oak. O’Rourke told the questioner that he supports “those members of the House of Representatives who believe it’s time to move forward with those proceedings.”

“I’m with you,” O’Rourke said. “Impeachment is a hard thing to talk about, it’s uncomfortable, and yet this is a test for us to decide what we stand for.”

By Aliyya Swaby The Texas Tribune texastribune.org Federal officials will give Texas’ special education programs another round of scrutiny this... read more