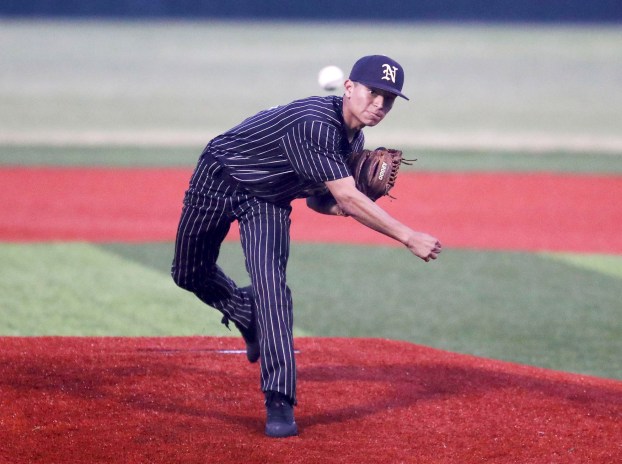 Nederland's Jacob Mares pitches to Ball High in the second game of the 5A Region III bi-district round playoff in Galveston on Thursday. There was a lightning delay after the first inning. (Kelsey Walling/Galveston County Daily News) 5-2-19

BASEBALL: Against wind, Bulldogs move on

Both at The Ballparks in Crosby

Down one game in a best-of-three series, Nederland went into what coach Bryan Spell called “a tough ballpark” at Galveston Ball.

“The wind was like we were playing on a beach,” Spell said. “We did enough to score some runs. We hit balls extremely hard that were outs.”

Their season on the line, the Bulldogs did not hit a ball that left the infield Friday in eliminating Ball, 3-1, in the third and final game of a 5A bi-district series. Nederland won the second game 5-3, scoring three runs without a base hit in the sixth inning, thanks to some errors by the Tornadoes.

“The kids did what they had to do to win two games,” Spell said. “It’s a testament to the kids’ leadership.

“Angleton is a tradition-rich program,” Spell said. “I know they won a tough district. They’re 22-5 for a reason. It’s no fluke they’re district champions. They’re the real deal.”

Should the Bulldogs advance, a potential 5A Region III quarterfinal series vs. Port Neches-Groves would await them. PNG (18-13-1), the 21-5A third seed, will face 24-5A fourth-place Shadow Creek in the area round after taking two from Friendswood in Friday. Shadow Creek swept 23-5A champion Houston Milby.

The pitching performances of Noah Gregory and Jacob Mares were big factors as well in the Bulldogs’ surge. Mares threw a complete-game, seven-hit victory in Game 2 and tossed two hitless innings to start Game 3, while Gregory came on for a five-inning, one-hit gem.

Nederland generated some offense after going 17 straight innings without scoring a run (two losses to Barbers Hill and a 2-0 loss at home to Ball in Game 1), opening the scoring on a Brock Holton single in the first inning of a doubleheader that actually began Thursday in Galveston. Bad weather forced the game to resume Friday.

The challenges the Bulldogs faced Friday could come in handy against the Wildcats.

“I think after what we went through, nothing will shake [us],” Spell said. “If they beat us, there will be no excuses. They’re a really good team. We can beat a district championship team, but we’re going to have to play our best.”

Sabine Pass’ 2A area-round softball series against Shiner has turned into a one-game affair, and the Sharks are done for... read more