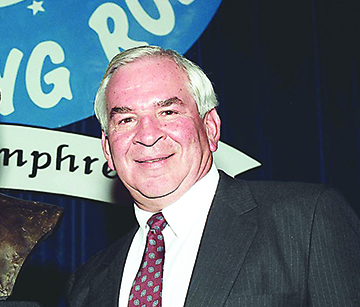 BEAUMONT— The Texas Senate adopted a resolution honoring firm founder and longtime attorney Walter Umphrey for his legal accomplishments and philanthropic service to Southeast Texas and on behalf of all Texans.

Senate Resolution No. 641, at the request of Sen. Kirk Watson, was approved unanimously on April 25.

“Walter Umphrey has had a profound impact on the legal profession in Texas, and it is truly fitting that he receive special recognition for his career and for his invaluable service on behalf of the men and women of this state,” the resolution states.

Texas SR641 highlighted Umphrey’s commitment to the law and his legal accomplishments including his work as lead counsel for the group of attorneys representing the state of Texas in the historic $15.3 billion settlement with the tobacco industry.

Umphrey’s many accolades and awards include “Legal Legend” by Texas Lawyer and “Top Texas Lawyers of the 20th Century.” Of special note were Mr. and Mrs. Umphrey’s philanthropic support of Baylor Law School, Lamar University the Beaumont community and Mr. Umphrey’s service on the Texas Parks and Wildlife Commission.

Thanking Senator Watson for carrying the resolution, Provost Umphrey partner Bryan Blevins said, “The Senate resolution is a noteworthy testament to Walter’s remarkable career and his dedication to the hard-working men and women of Texas.” In addition to the resolution, Mrs. Umphrey was presented with a gubernatorial proclamation and the flag flown over the capital in Mr. Umphrey’s honor.

WASHINGTON – A former senior correctional officer at the Federal Correctional Complex in Beaumont was indicted on Wednesday on charges... read more