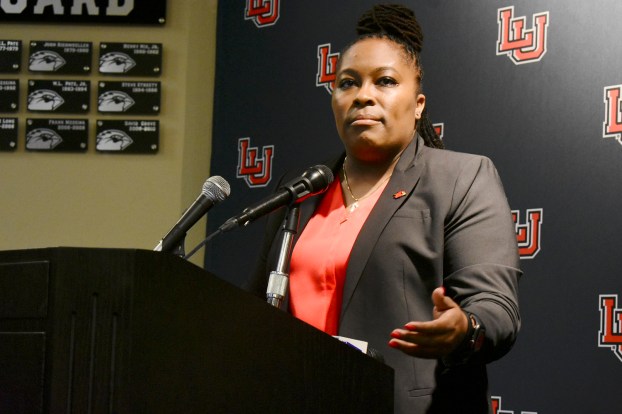 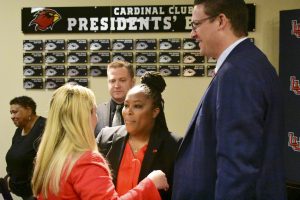 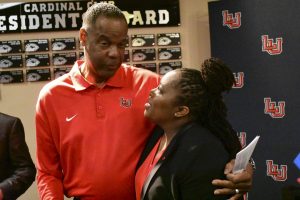 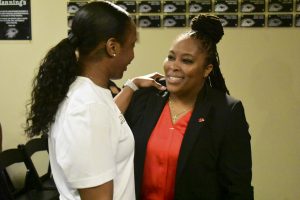 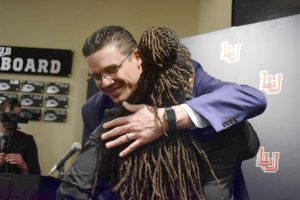 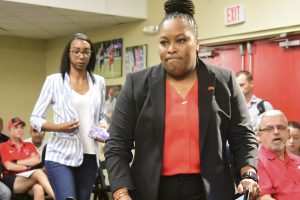 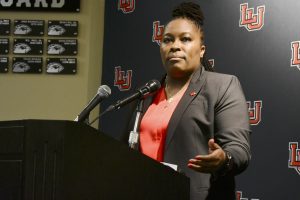 BEAUMONT — When Aqua Franklin went to interview for women’s basketball head coach at Lamar, her sister was close to giving birth to a boy.

“I said, hold onto that baby until I get back,” Franklin said.

The Tyler native and former Texas A&M standout said she knew the Lamar job “was it from that moment” she visited, and it wasn’t quite a week that Robin Harmony had left for the College of Charleston.

Franklin was introduced to the public Wednesday morning at the Cardinal Club room of the Montagne Center. Her hire officially ended a 12-day vacancy left by Harmony, who led the Cardinals to three Southland Conference regular-season championships in six seasons at the helm.

Franklin, who spent the past five seasons on Kansas’ staff (the last four as associate head coach) said she spoke to her new team at 7 a.m., 4 hours before her introductory news conference.

Kansas head coach Brandon Schneider said he “couldn’t be more excited for coach Aqua,” adding she “is the total package and everything one looks for in a leader of a program — a terrific recruiter, teacher of the game, and mentor of young women — she will be a tremendous ambassador for Lamar and the Beaumont community.”

After saying there were “a couple of key characteristics” he was looking for in a coach, Born ended up listing six — recruiting ties to Texas, style of play, player development on and off the classroom, NCAA experience as player and coach, likeability and fit and passion and drive.

“Someone that understands Texas and can recruit the backyard,” Born said. “That was important to me. She’s ready to be a head coach, and I couldn’t be more excited.”

Lamar’s conference championship status was important to Franklin, who’s been a part of rebuilding and reloading projects on other coaching staffs. She used the first season under Vic Schaefer at Mississippi State (2012-13) as an example, as that team went 13-17 but eventually became a national championship contender.

“It was very important,” Franklin said. “Just having a winning tradition. I’m a winner.

I was all about coming into a winning program.

“I’m still going to bring the same philosophy to the program.”

A’Quonesia Franklin graduated from John Tyler High School and was a standout guard at Texas A&M from 2004-08. She was among the Aggies’ top three players in career assists with 627 and averaged 8.4 points per game, helping the then-Big 12 team to its first Elite Eight as a senior. She was named honorable mention All-America and drafted 38th overall in the WNBA draft by the Sacramento Monarchs.

Franklin also played with the Seattle Storm before going into coaching as a graduate assistant at A&M.

She first worked with Schneider at Stephen F. Austin in the 2010-11 season, and then went to KU the next season, helping the Jayhawks reach the Sweet 16. She mentored honorable mention All-American Angel Goodrich, who averaged 23.3 points that season.

But Franklin’s “fast and furious” style of play is centered around defense.

“We want to keep our opponents on their toes,” she said. “We want to run. I want to coach players who know how to play basketball, not put them in a box set and they become robots.”

Franklin must now establish her own coaching staff at Lamar and said she’ll recruit the Cardinals’ three signees for the 2019-20 season — Kayla Mitchell of Jonesboro, Arkansas; Taylor Williams of Daytona Beach, Florida; and Malay McQueen of Dallas — in hopes of keeping them committed. The Cards are now facing life without NCAA all-time steals leader Chastadie Barrs and 3-point threat Moe Kinard, both seniors, as well as a recent transfer to the University of Houston in freshman Miya Crump.

“If they’re on our team, I recruit them anyway because that’s important.”

Jamaal Charles will retire as a Kansas City Chief, according to a tweet from a Kansas City, Missouri, radio station.... read more