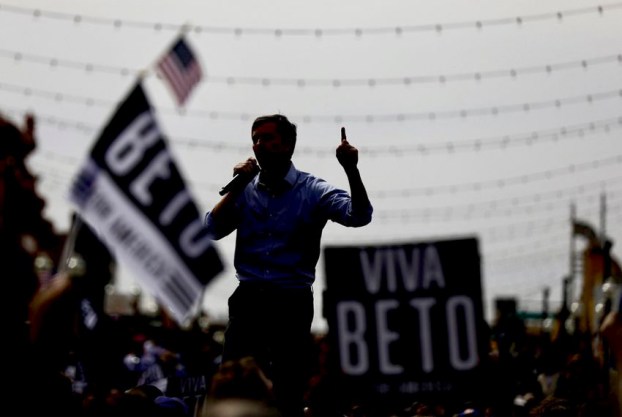 Presidential candidate Beto O'Rourke spoke at a rally in El Paso on March 30. (Ivan Pierre Aguirre for The Texas Tribune)

Democratic presidential candidate Beto O’Rourke on Monday unveiled an ambitious plan to combat climate change that spurs $5 trillion for the cause and aims to achieve net-zero U.S. emissions by 2050.

In making the first major policy announcement of his campaign, O’Rourke is seeking to get specific on an issue that has dominated the Democratic primary and increasingly animated the party more broadly — including in Congress, where U.S. Rep. Alexandria Ocasio-Cortez has made waves with her crusade for a Green New Deal. That plan calls for net-zero global emissions over the next three decades.

“The greatest threat we face — which will test our country, our democracy, every single one of us — is climate change,” O’Rourke said in a statement. “We have one last chance to unleash the ingenuity and political will of hundreds of millions of Americans to meet this moment before it’s too late.”

O’Rourke’s proposal has four main components. On his first day in office, he would take executive action to reduce pollution by doing things such as recommitting the United States to the Paris climate accord that President Donald Trump withdrew the country from in 2017. He would also move unilaterally to strengthen waste limits for power plants and fuel economy standards.

Then, O’Rourke’s first demand of Congress would be to “mobilize” $5 trillion over 10 years to update infrastructure and speed up innovation to take on climate change. In his first 100 days, O’Rourke would work with Congress to devise a “legally enforceable standard” to get to net-zero emissions by 2050 and halfway there by 2030. And finally, O’Rourke would boost resources to help communities already facing extreme weather, including pushing a 10-fold increase in spending on pre-disaster mitigation grants and broadening the federal crop insurance program to cover more threats.

The plan also puts an emphasis on protecting federal lands, setting a more ambitious zero-emissions target on them — 2030 — while banning new fossil fuel leases on them. One of O’Rourke’s rivals, Massachusetts U.S. Sen. Elizabeth Warren, proposed a moratorium on new leases earlier this month, and after saying last week that he was willing to consider such a ban, he threw his support behind it at a rally Sunday in San Francisco where he offered a preview of his forthcoming plan.

“Every single purchasing decision, leasing decision, that the federal government makes, should include the cost of pollution and the cost to our climate,” O’Rourke said. “No more leases on federal lands for oil and gas drilling, and let’s make sure those leases that are enforced right now are changed to reflect the true cost in the royalties that are paid.”

O’Rourke’s plan would not be cheap, and it calls for leveraging the $5 trillion mobilization by a “fully paid-for $1.5 trillion investment.” O’Rourke proposes paying for that through “revenues generated by structural changes to the tax code that ensure corporations and the wealthiest among us pay their fair share.” O’Rourke would also free up money by ending tax breaks to fossil fuel companies.

The plan marks the first policy rollout of O’Rourke’s month-and-a-half-old campaign aside from an earlier proposal to have cabinet secretaries hold monthly town halls. And it comes as O’Rourke, once the most buzzed-about candidate, finds himself settling into a more normal campaign rhythm while other candidates take their turns in the spotlight he once occupied.

O’Rourke is pitching the climate policy amid his first visit to California as a candidate, a four-day trip that began Saturday. On Monday, he was set to tour the state’s Central Valley, a major agriculture region that suffers from severe air pollution. He was beginning the day in Yosemite National Park.

O’Rourke has long talked about climate change as one of the most urgent threats facing the country, but as he has become a national figure, some on the left have questioned his commitment to the cause. He recently expressed regret for some of his votes in Congress on the issue, specifically reversing his support in 2016 for legislation that left the door open to using federal money to study oil and gas exploration in the eastern Gulf of Mexico, where offshore drilling is mostly off limits.

O’Rourke has nonetheless won praise for prioritizing climate in his White House bid, including from a California Democrat, U.S. Rep. Jared Huffman, who sits on the House’s new Select Committee on the Climate Crisis. Huffman, O’Rourke’s former roommate in Washington, D.C., introduced him at the San Francisco rally and later revealed that he advised O’Rourke on his climate policy.

Early reviews of O’Rourke’s plan were mixed. The League of Conservation Voters hailed it as the “kind of leadership we need from our next president” and called on other candidates to put forward similarly ambitious ideas.

By Alex Samuels The Texas Tribune texastribune.org In the first legislative session after the deadly mass shooting at Santa Fe High... read more