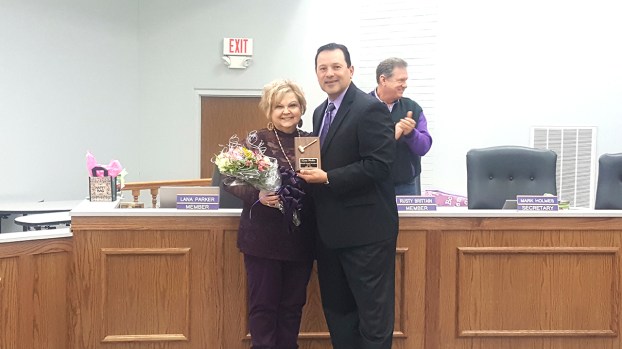 Lana Parker, left, poses with Port Neches-Groves Independent School District Superintendent Mike Gonzales as she retires from the school board in this December 2018 photo. (File photo)

Parker tapped for temporary return to PNGISD board

PORT NECHES — Lana Parker is set to step back into the role of school board trustee, at least for a little while.

Parker, who previously served for 9 ½ years on the Port Neches-Groves Independent School District board of trustees, twice as president, was asked to serve for six months until the November election to fill the void left by Mark Holmes.

Holmes, who has served as a trustee since 2016, submitted his resignation Friday; the board accepted it. He is stepping down so one of his family members can apply for a position in the district, Brenda Duhon, assistant superintendent for curriculum and instruction/technology, said. Superintendent Mike Gonzales was at a conference and unable to attend the meeting.

Parker said in a phone call she is humbled the board chose to ask her.

Parker, who served as a teacher for 33 years, is experienced with bond talks as well as the district’s budget — both are topics she will deal with in the upcoming months.

BEAUMONT — Kelly Daws will get her day in court — again. Daws, who was found guilty in March and... read more