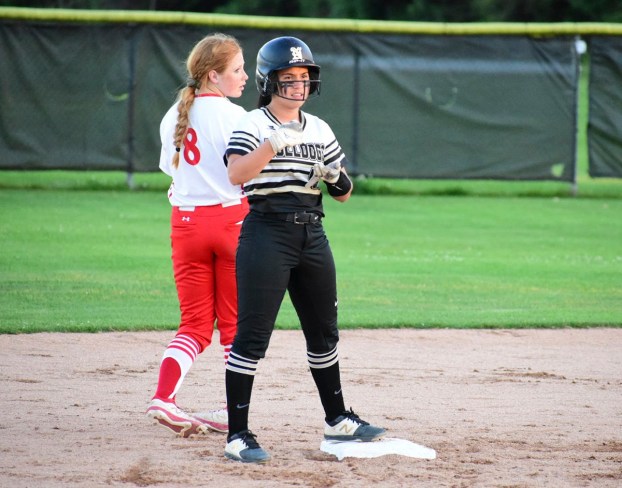 Alyssa Collazo of Nederland does the “Let’s eat” sign after a third-inning double as Hannah Wiggins of Crosby looks on Thursday in Nederland. (I.C. Murrell/The News) 4-25-19

SOFTBALL: Crosby goes 1-up on Nederland despite Trahan’s 12 Ks 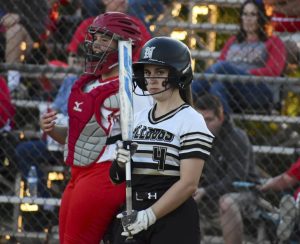 Tori Morrison of Nederland looks toward coach WIll Mallette (not pictured) for instruction as Crosby catcher Maggie Herdejurgen looks away Thursday in Nederland. (I.C. Murrell/The News) 4-25-19 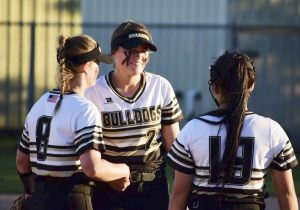 Nederland pitcher Destini Trahan (22) reacts with teammates Lexi Eversole and Alyssa Collazo following a strikeout in the second inning Thursday in Nederland. Trahan struck out the side. (I.C. Murrell/The News) 4-25-19 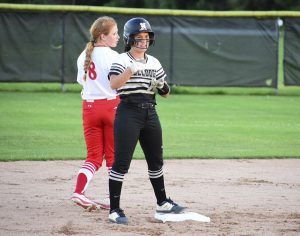 Alyssa Collazo of Nederland does the “Let’s eat” sign after a third-inning double as Hannah Wiggins of Crosby looks on Thursday in Nederland. (I.C. Murrell/The News) 4-25-19

NEDERLAND — Getting the big hit has been a concern for Nederland softball coach Will Mallette.

Despite Destini Trahan’s 12 strikeouts Thursday, the Bulldogs could not find the clutch hits at home and Crosby escaped Game 1 of a best-of-three 5A bi-district round series with a 2-0 victory.

“That’s what we’ve been seeing lately. We’ll hit the ball hard and then can’t get a runner over,” Mallette said. “We can’t get a bunt down early, and their outfield covers every bit of grass out there.”

Mallette predicted Thursday the Bulldogs (21-14) would need at least three runs to pick up the win, given Trahan’s pitching and the Bulldogs’ defense. Turns out, Cece Pace’s three strikeouts, all in the fourth and fifth innings, and stellar catches in the outfield proved key for the Cougars (21-9) in the shutout.

Port Neches-Groves and Santa Fe will play at the auxiliary softball field at Crosby in their single-game bi-district matchup at 7 p.m. Friday.

Hannah Wiggins led off the game with a single and scored on Maggie Herdejurgen’s single with one out. Crosby did not score again until Jenna Johnson, who doubled with one out in the sixth, came home two at-bats later on Heather Harrison’s two-out single off a 1-2 pitch.

Pace induced two Nederland groundouts in the seventh before Chaelyn Esquivel singled to bring up the potential tying run. But Hannah Brown batted into an unassisted play at first base to seal the Crosby win.

Nederland also had five hits. Trahan led off the Nederland second with a single and Sierra Wiltz singled two at-bats later, only for a groundout and flyout to keep the Bulldogs off the board.

Brittany Taylor singled in the fifth for Nederland. Pace doubled in the fourth.

Trahan recorded 10-plus strikeouts for the 11th game and has 255 Ks this season. She struck out the side in the second inning and fanned three straight after a leadoff walk in the third.

PORT NECHES — A lifelong dream was realized in December when Jacie Droddy signed with Texas A&M for track and... read more