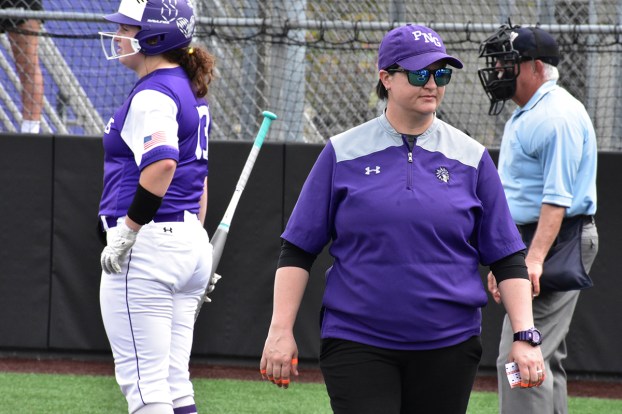 Playoff intensity hits PNG coach Jessica Lemoine the same in a single game as it would in a three-game series. (I.C. Murrell/The News) 3-11-19

SOFTBALL: One game will settle Indians vs. Indians

PORT NECHES — When Nederland and Crosby play the second game of their best-of-three 5A bi-district series at The Ballparks in Crosby on Friday, Port Neches-Groves and Santa Fe will square off in Game 1 — of 1.

“Playoffs put enough pressure in itself,” she said. “Yeah, it doesn’t give you that ‘oops’ kind of game, but if you’re holding onto the playoff tension and playoff excitement, then every pitch is the most important pitch.”

Lemoine said she and Santa Fe coach Beth Baros mutually agreed on a single game on a neutral site for the right to take on Houston Austin or Shadow Creek in the area round.

Asked about her reasoning behind one game, Lemoine said: “It’s just how you feel about it. I felt like we’d be strong enough in one game and that we can get the job done and not have to waste more pitches in the second game with our pitcher.”

Junior pitcher Cameron Niedenthal doesn’t mind that plan at all.

“We played Santa Fe last year [in the regular season], and they did beat us, but this year, I do think we stand a chance,” Niedenthal said, adding her Indians have more team chemistry.

At the plate, PNG is strong with a .363 team batting average. Junior Kasidee Sartin has team highs of .433 (among those with multiple at-bats), 21 RBI (shared with classmate Maylin Louvier) and five home runs.

Santa Fe’s green-and-gold Indians (15-8, 13-3) finished second in District 22-5A with only one senior on their roster, according to MaxPreps. PNG’s purple-and-white Indians, with four seniors, took third in a 21-5A that includes 5A second-ranked Barbers Hill and is coming off a 17-0 win over Vidor for its third win in the last four after back-to-back losses.

“District showed a lot,” Lemoine said. “Everybody kind of beat up on each other a little bit, for the most part, minus Barbers Hill being untouched by anybody else. Everybody else had losses. A lot of people did some good things. We had to fight from behind in some things. We had some tough lessons. We got humbled a little bit. So, being able to be humbled but still hungry and have that extra little spark going in should help us.”

“I don’t think we’re nervous,” Sartin said. “I think she [Lemoine] has prepared us good, and I think we’re ready.”