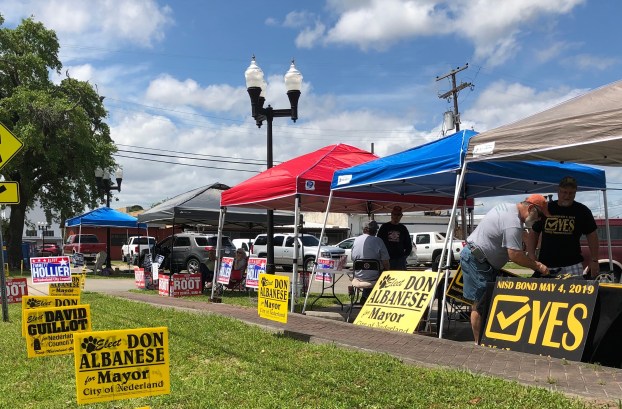 Chris Moore/ The News Candidates and supporters line the parking lot across Nederland City Hall with canopies and signs.

454 vote on first day in Nederland

Nederland City Clerk Gay Ferguson said voter turnout of 454 was the highest she had seen for a citywide election since she assumed her position in 2010.

“There was nonstop traffic all day,” Ferguson said. “We had a constant line going from the machines to the door.”

Those looking to vote early can go to City Hall on 12th Street between Nederland Avenue and Boston Avenue.

Along with a contested mayoral race between Don Albanese and Jeff Ortiz, voters are likely drawn to the polls because of the Nederland Independent School District bond election. Proposition A totaling $151.1 million would build a new high school, add new learning areas and improvements to the elementary schools, improvements to the middle schools and safety and security.

Proposition B would include upgrades to Bulldog Stadium at the cost of $4.5 million.

There is also a contested race for a Ward 4 City Council seat between Sylvia Root and David Guillot.

Candidates and supporters lined the parking lot with canopies and signs across the street from City Hall to greet voters as they walked to the polls.

Each candidate that was in a contested race was either present or had supporters present at the polls along with members from Building Tomorrow’s Leaders, a group supporting the Nederland Independent School District bond.

Election day is May 4.