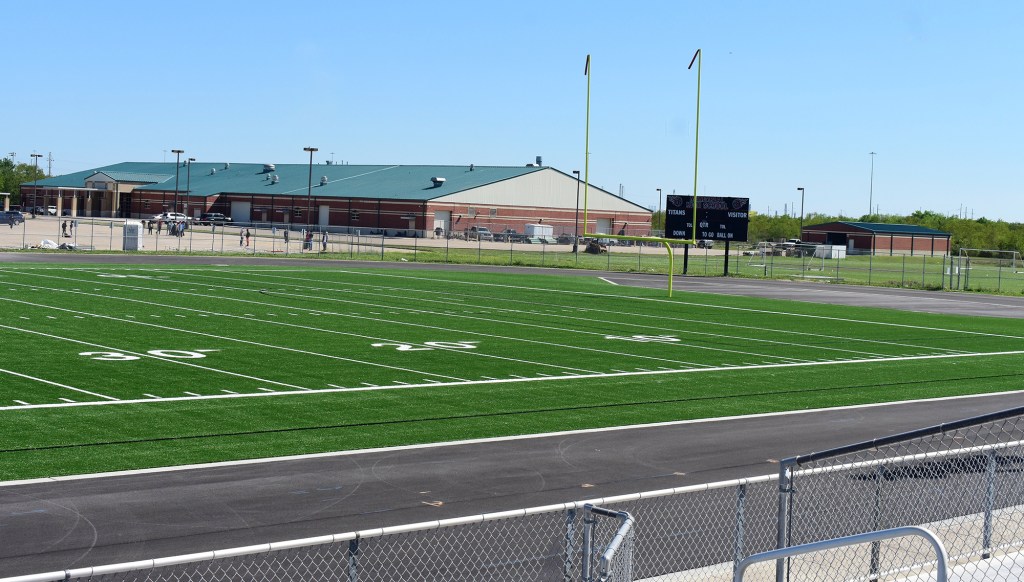 These days, Memorial Stadium shines much brighter from Jefferson Drive in Port Arthur at night.

While football season isn’t until August, the LED lighting is making the longstanding stadium on the Thomas Jefferson Middle School campus perfectly visible on site and from street view for fans and drivers alike. It has also enhanced the scenery of the Memorial Titans’ home facility at night.

The new nightlights are one of two recent upgrades to athletic facilities under a bond measure that PAISD voters passed in a November 2014 election. Porterie believes the upgrades are an investment in the athletic pursuits of Memorial’s athletes.

“Our kids deserve that,” Porterie said. “They need to see nice fields so they know we care about making their athletic success easier. They’re excited, and that’s all that matters.”

Another upgrade, which Porterie said cost “close to” $1,000,000, has come just in time for the Titans to begin spring football drills. The practice facility at Memorial High School is now equipped with artificial turf, with a surface for the track to be installed in a matter of days. The turf’s installment was completed last month, at which point the blacktop of the oval had to settle for 28 days before topping it with a surface.

That means all ninth- through 12th-grade football players will not have to take a bus much more just to practice on turf, as a majority of high school programs in Texas are no longer competing on grass fields.

“We moved the ninth-grade center to the high school,” Porterie said, referring to the freshmen’s move from the Stephen F. Austin campus. “Instead of transporting all our kids to the stadium every day, we want to make it comfortable. We want them to walk in their backyard to a more easier, comfortable field. It’s easier to have everything on one campus instead of wait for a bus to come, and you lose time.”

“You’ve already seen the difference. I think there’s been two days, one being [Thursday] and one being last week where it rained during the day or the day before, and we’re still able to go on the field and work, whereas in the situation before, we weren’t. It’s been a great deal, and it shows the school district and school board are committed in all parts of the athletic department. With the track being done, it’ll be a really nice facility that we have.”

A new track will mean Memorial’s successful boys and girls track teams will get to host a meet on campus since the present high school complex opened for the 2009-10 school year. The teams have been practicing at the auxiliary field to Memorial Stadium.

The PAISD has solicited bids for a new floor in the competition gymnasium at Memorial. Although not easily visible, the floor sustained damage from Tropical Storm Harvey in August 2017.

The district’s insurance will pay for this project, although PAISD has not yet received bids.

“The water came in from the doors, and it lifted up the floor around the edges,” Porterie said. “You can’t just change a part of a floor. You have to change the entire floor.

The changes to the facilities demonstrate the district’s commitment “to doing things the right way” in athletics, Morgan said.

“I talked to a lot of coaches, and one told me [Thursday] night, … ‘Make sure you say there because everywhere is not that good. I think people realize this is a really good situation and can be a really special place,” he said.