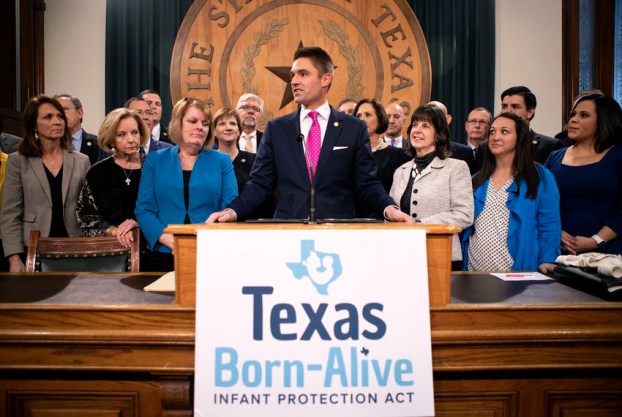 The Texas House tentatively approved a bill Tuesday that would require doctors to treat babies born alive after a failed abortion attempt.

The measure — which addresses a rare circumstance — would need a final approval from the House before it could go to the Senate, which has already approved a similar bill.

Under House Bill 16, authored by Plano Republican state Rep. Jeff Leach, doctors who “fail to provide the appropriate medical treatment” would be charged with a third-degree felony and have to pay a fine of at least $100,000. The measure gives teeth to an already existing statute – including Texas Family Code and federal law – that grants legal protections to children born after an abortion attempt.

The “born alive” bill is part of a national Republican response to abortion advocates’ efforts to roll back regulations on late-term abortions in states like New York and Virginia. Nine states have proposed versions of the “born alive” bill this year, and the measure has passed the North Carolina House and both chambers of the Minnesota legislature, according to Elizabeth Nash, state policy analyst for the abortion rights thinktank the Guttmacher Institute.

“At the heart of the bill, the ‘Texas Born Alive Protection Act’ — it is designed to strengthen the protections to those babies who survive abortions,” Leach said, surrounded by a huddle of the bill’s dozens of co-authors. “Join me in supporting House Bill 16, showing the rest of the country — states like Virginia, New York and Washington, D.C. — that we’re going to continue to stand for life in this state.”

The measure passed 93 to 1. Fifty members were present but didn’t vote at the behest of state Rep. Donna Howard, who gave a tearful speech that incited applause from the floor.

“The aim of HB 16 is clear: further stigmatize abortion, misinform the public, intimidate physicians, and interfere with a woman’s ability to seek medical care,” said Howard, the only representative who debated the bill. “To debate this bill…would legitimize its false information. We refuse to waste limited time we have here by entertaining malicious and purely political attacks against women and doctors.”

The Senate version authored by Brenham Republican state Sen. Lois Kolkhorst passed on a vote of 21-10 last week, with Democratic state Sens. Eddie Lucio of Brownsville and Judith Zaffirini of Laredo bucking their party to support the measure.

The House and Senate versions differ in how they define the appropriate standard of care. HB 16 would require the physician to ensure that the infant be immediately transferred and admitted to a hospital, but Senate Bill 23 makes no such stipulation.

The House bill, unlike its Senate counterpart, would also give the infant’s parent grounds to sue the abortion provider.

Bill authors in both chambers are still determining whether they will work to move the House or Senate version forward, Leach said.

During the bill’s hearing, Leach said that the measure is “not about access to abortion.”

However, opponents say it would deter doctors from performing abortions. Critics also say the measure is a solution in search of a problem — that it’s unnecessary because protections already exist and the situation is rare.

Texas reported zero live births resulting from an abortion between 2013 and 2016, all the years that DSHS has collected the data.

The U.S. Senate rejected a national version of the bill earlier this year, which prompted the state-level response in Texas.

“Where other states are passing legislations protecting abortionists… and where Washington D.C. can’t even bring the bill up for a vote, Texas will act,” Leach said during the bill’s hearing.

By Shannon Najmabadi And Emma Platoff The Texas Tribune texastribune.org The Texas Senate broke a logjam Monday that had paralyzed a piece of priority... read more