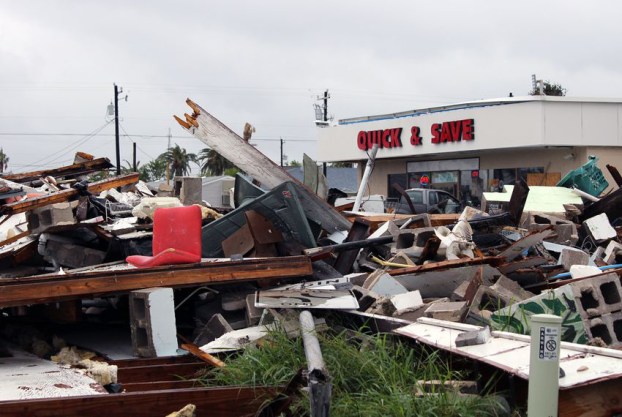 Debris covered a street corner in Rockport in December, more than three months after Hurricane Harvey made landfall in the tiny town that sustained extensive damage. (Brandon Formby/The Texas Tribune)

Is Texas leading on disaster preparedness? Yes and no, experts say

More than a year and a half after Hurricane Harvey slammed into Texas, killingdozens, the state is still waiting on billions in federal recovery dollars. In the meantime, Texas lawmakers are looking to prepare the state — the most disaster-prone in the nation — for future storms.

During their first session since Harvey — a close second to Hurricane Katrina on the list of costliest tropical cyclones in U.S. history — legislators have filed dozens of bills this year aimed at storm recovery, response and preparedness. And they appear poised to withdraw billions from Texas’ historically flush emergency savings account to bankroll a variety of disaster-related items — measures that disaster response and flood control experts say are rare for any state, but especially historically frugal Texas.

Much of the money would go to school districts that saw sharp declines in property values and student enrollment after Harvey and to state agencies that diverted resources to respond to the storm. But most of it would go to help communities finance overdue flood control projects — and to help them secure billions more federal recovery and flood mitigation dollars.

Specifically, the legislation calls for the money to be funneled into a special account from which grants and low-interest loans would be doled out to communities for projects that may not be eligible for federal funding. It also would be used to help storm-battered communities pay for the so-called “local match” they must send to the federal government before it will release billions more dollars to repair storm-battered government facilities, and harden public and private structures so they can better withstand future storms.

The Texas Senate wants to put $1.8 billion toward those efforts, while the Texas House wants to invest more than $4 billion — though it wants to ask voters for permission to spend most of that. Lawmakers will have to settle those differences before the session ends in late May. Whatever they settle on, the sum is sure to be a small sliver of the tens of billions of Harvey-related dollars Texas will receive from the federal government when it’s all said and done. But state lawmakers argue it’s still a major step.

Last month, state Sen. Brandon Creighton — a Republican whose Houston-area district suffered during Harvey — described the upper chamber’s proposal as “probably the most comprehensive, forward-reaching approach that any state has offered following a disaster.”

According to several disaster recovery and flood management experts who reviewed the legislation, Texas is indeed ahead of the curve in some aspects of disaster preparedness, but they say it’s behind other states in other areas.

University of Maryland research engineering professor Gerald Galloway, a former U.S. Army Corps of Engineers district commander who contributed to a retrospective Harvey report ordered by Texas Gov. Greg Abbott, said it’s a big deal for any state to invest its own money in such initiatives rather than looking solely to the federal government for help, which most states do.

“What I have watched is that over the last year or two years, Texas has looked the demon in the eyes and said: We recognize that these (storms) are big deals,” he said. “Texas is following the first of the principles: Learn what your problem is and start developing plans to deal with it. It’s much better than saying: Let’s talk some more about it. There’s an awful lot of that going on around the country.”

Indeed, lawmakers spent months studying ways to improve disaster response and storm preparedness ahead of the current legislative session, holding numerous public hearings at the state Capitol and in coastal communities last year. Many of the dozens of bills now under consideration mirror the recommendations that resulted.

“I commend the House and Senate, which have both proposed using rainy day funds to help rebuild Texas stronger and more resilient than before disaster struck,” Abbott said in a speech in February, a few weeks into the legislative session.

The Republican noted that the federal government has appropriated more than $30 billion in aid, but said “we all know, more resources are needed to help Texans rebuild.”

One major proposal was creating a statewide flood plan. Much like Texas’ State Water Plan, it would be a wish list of projects compiled on a regional basis with the overarching goal of mitigating flooding across the state.

And communities with projects that make the list — such as detention pond construction or dam repairs — would be eligible for financial assistance from the state.

While both the Texas House and Senate leaders support the creation of a statewide flood plan and a revolving fund to help communities pay for projects, they disagree on how much to spend and how to approve the money; A measure under consideration in the Texas House would ask voters for permission to withdraw $3.26 billion from the state’s rainy day fund, while the Senate has proposed pulling $840 million from the savings account without voter input.

Chad Berginnis, executive director of the Association of State Floodplain Managers, said it appears that few — if any — states maintain such a statewide wish list of flood control projects, though he said recent research indicates that at least a dozen states help communities pay for them in one way or another. It’s always a positive when states “step up and own part of the flood risk management problems happening in their own state,” Berginnis said.

But he suggested other states are much farther ahead when it comes to managing flooding. For example, he said Illinois pays for floodplain mapping to identify high-risk areas — an initiative the federal government typically handles — and has stricter regulations for development within them. Minnesota does all of those things, Berginnis said, while also offering a program that gives communities grants to use as local matching money to help draw down federal funds or to do projects on their own.

“Effective states also do planning and coordination,” he added.

The federal government typically requires communities to pay for a certain percentage of major projects — no matter the type. After disasters, communities often look to their states for help with that local match.

About two-thirds of states cover some or all of local matching funds after disasters, said Daniel Craig, a former recovery director for the Federal Emergency Management Agency who now serves as chief operating officer at Tidal Basin, a private disaster recovery consultancy.

Texas has never chipped in to help with matching funds — at least in recent memory — and lawmakers have openly worried about whether doing so this time will set a precedent.

Houston-area officials lobbied aggressively for local match assistance on behalf of all 55 Harvey-impacted counties, noting that $1.3 billion from the state would help draw down $11 billion in federal money.

“This is our one, big ask,” said Bill Kelly, director of government relations for Houston Mayor Sylvester Turner.

The House and Senate have both proposed putting up about $600 million.

Lawmakers also have proposed funneling $200 million to coastal communities to draw down some $4 billion in federal dollars to build or rehabilitate dozens of miles of levees in southeast Texas. The project is a major component of a larger coastal protection system that local officials and scientists have long envisioned for the state to safeguard it from deadly storm surge during hurricanes.

Another measure Craig said many states have already pursued amid a push from FEMA is locking down contracts for debris removal before storms hit so local officials don’t have to find contractors in the midst of a natural disaster. A bill that’s sailed through the Texas Capitol this year would do just that.

“There’s been a huge emphasis on that and it’s great to see Texas adding that as kind of a priority,” Craig said. “Recovery doesn’t start until debris is taken off the streets.”

Enacting stricter building codes — such as requiring minimum building elevations or restricting construction in flood-prone areas — is another example of something Texas is now considering that other states implemented years ago. The Texas General Land Office has endorsed the idea, calling the state’s current building codes “weak and uneven.”

However, a key bill that would require Texas to adopt more up-to-date municipal building code standards — something Florida, Virginia, Louisiana have already done — has languished.

Craig, the former FEMA official, said Florida completely overhauled its state building codes in the wake of Hurricane Andrew in 1992 to make homes and buildings more resistant to hurricanes — he described it “one of the most sweeping packages a state has ever done as far as resiliency and mitigation.” Still, it might be a tough sell in pro-business Texas, he said.

Galloway, the former Army Corps district commander, also noted that Texas is not openly addressing the overarching issue that figures prominently in many other states’ plans: The looming threat of climate change. The term was noticeably absent from the Harvey report Galloway worked on for Abbott, which instead emphasized the need for “future-proofing.”

“Creating a climate change preparedness plan — that would be a startling one for Texas,” Galloway said. “I think it’s important for people to acknowledge that there are changes — we are having bigger storms and we are having longer storms and you need to have a plan that deals with that.”

At least a half dozens bills filed this year by Democratic state lawmakers that would require the state to plan for climate change haven’t received public hearings.

“The U.S. Department of Defense has conducted a study on climate change threats — why shouldn’t Texas do the same?” state Rep. Mary González of Clint said in a statement last month when she filed a bill that would require Texas A&M University to study the impacts of global warming on the state. “As the second largest state in the country, we need to do our part to keep Texans safe and protected.”

Still, the measures that Texas lawmakers are considering this year are exciting to Roy Sedwick, the executive director of the Texas Floodplain Management Association, who has advocated for such policies for years with limited success.

“This is the first time we’ve seen some really real, good, positive moves toward making some big changes,” he said. “I’m hoping Texas will catch up and become a leader.”

Support for this story was provided by the Weather Eye Award, an award given to distinguished local reporters by RiseLocal, a project of New America’s National Network.

LEAGUE CITY — More than 27 years have passed since anyone saw Donna Prudhomme alive. Dubbed “Janet Doe” by the... read more