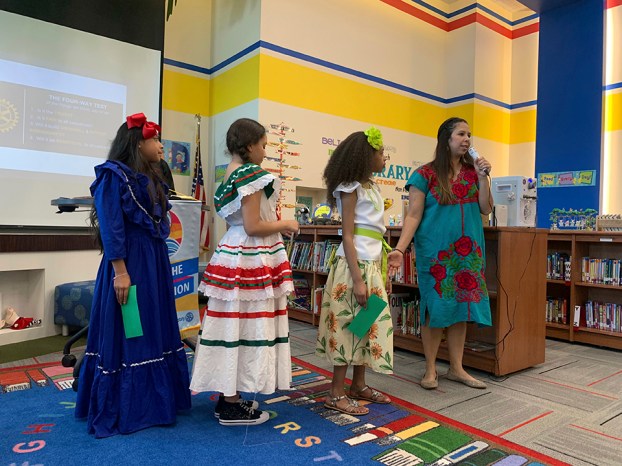 Teacher Elizabeth Cardenas and the Spanish Club make a presentation at the Rotary meeting. (Special to The News)

For Tyrrell Elementary School, Thursday was a day for company.

For some visitors from the Port Arthur Rotary Club, it was like a homecoming.

Through its longstanding, annual dictionary distribution project, the Rotarians give each third-grader in city schools his or her own dictionaries, a gift that tightens the bond between the service organization and schools they seek to serve. It’s one of many projects that involve Rotary and local schools.

Tyrrell’s third-graders represented the largest class this year when it came to passing out dictionaries, Rotary President Callie Summerlin said.

“It means a lot to us that you invited us into your home,” she said to administrators, faculty, staff and students who gathered into the school library, where the Rotarians held their weekly lunch meeting. “We love our young people and are always looking for more ways to engage with them and support them as they navigate through school, family, home and church life.”

Among guests were Frank and Kay Eastman, connected over family generations to Capt. William Casper Tyrrell, an Iowan who moved to Port Arthur in 1900 and established a small hotel along the seawall. Tyrrell later moved to Beaumont to pursue opportunities related to Spindletop in oil and with other business interests, but he also developed the Griffing Park area, where Tyrrell Elementary, named for him, was located in 1926, two years after his death.

The Rotarians distributed commemorative coins — Tyrrell’s image was on one side, the original school’s image on the other — and marveled at changes at the school that were financed through a bond issue. The school serves some 850 students.

But individual Rotarians, too, proved their longtime affinity for Tyrrell when asked if anyone had attended school there — the hands of Rotarians Sam Monroe, Tom Neal, Jeff Hayes and several others present were raised.

Hayes recounted some of Tyrrell’s rich history; in the year Tyrrell was founded, he said, the Port Arthur school system added a 12th grade — it was the first in the state to do so — and the local refineries led an effort to upgrade the city schools.

Hayes noted that among its students over the years was Janis Joplin, who lived on nearby 32nd Street.

She was a classmate of Monroe’s, Hayes said.

Are any spaces left?: City says Motiva will need parking

Motiva has many miles to travel before it resettles office staff from its Savannah Avenue site into two historic downtown... read more