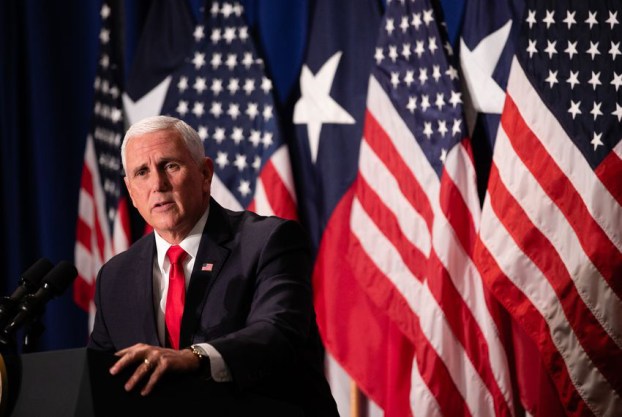 Vice President Mike Pence spoke to a crowd of supporters during a campaign event for U.S. Rep. Pete Sessions' re-election bid, at the Park Cities Hilton in Dallas Oct. 8, 2018. (Leslie Boorhem-Stephenson for The Texas Tribune)

Mike Pence to hold fundraisers in Dallas, Midland next week

Vice President Mike Pence is returning to Texas next week for a pair of fundraisers.

Pence will headline fundraisers Wednesday in Dallas and Midland, according to invitations. His office did not respond to a request for comment this week.

The Midland fundraiser is being hosted by some of the top GOP donors from the area, including oilmen Tim Dunn and Kyle Stallings.

Trump himself was in Texas on Wednesday for fundraisers in Houston and San Antonio that were expected to rake in over $6 million.

Pence last visited Texas on Friday, when he went to Houston to visit an Immigration and Customs Enforcement office and give a speech on Venezuela at Rice University. He also went to College Station to speak at an event on the vice presidency at the George H.W. Bush Presidential Center.