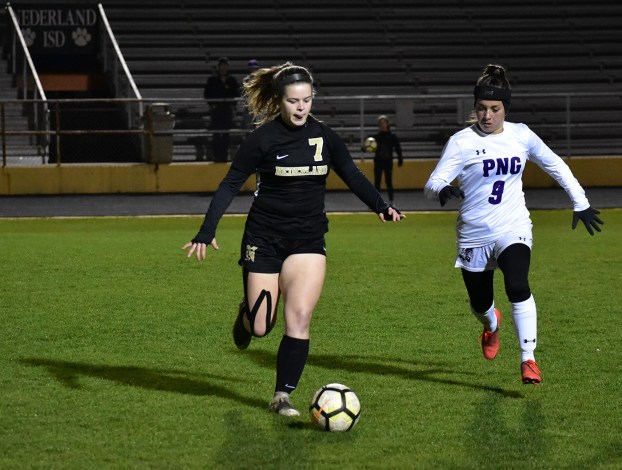 Brynn Landry (7) of Nederland and Grace Richard (9) of PNG battle for possession in a March 5 match in Nederland. PNG won in a shootout. (I.C. Murrell/The News) 3-5-19

The Madness may not be over in girls soccer. Their coaches sure hope not.

Earlier this week, Nederland’s Aaron Tomplait and Port Neches-Groves’ Aimee Bates did a pre-fight pose in a photo that was posted on Twitter. The (edited) message: “Here’s to hoping for a Saturday Mid-County Madness game.”

“Believing is one thing, but feeling it is another,” he said. “I think the girls could feel it. We felt the energy change last Friday night [against Friendswood].”

Tomplait’s District 21-5A champion Bulldogs and Bates’ district runner-up Indians defeated each other on the road during the regular season. It could only be fitting that a rubber match would be in store on a neutral pitch like Humble’s Turner Stadium — with the 5A Region III championship at stake.

“The fact that Nederland and us are in the regional semifinals speaks levels about the level of soccer played in Southeast Texas,” Bates said. “We’re the only team that’s had a clean sheet [for the UIL playoffs] going into the regional.”

“They’re pretty fast, physical,” Tomplait said. “They’ve got some defenders who can get the ball up the field. They remind me a lot of ourselves. They want to possess and push the ball forward. When I watch them, I see ourselves. I know it’s going to be a tough one, and we’re going to have to push through it and trust the girls to do what they’ve done and answer the call of battle.”

The Bulldogs have won five in a row since a shootout loss at home to PNG on March 5 and have not suffered a regulation or overtime defeat the past 17 outings. (They last lost to Atascocita 2-0 on Jan. 18 and tied Lumberton 1-1 on Jan. 22.)

Nederland has outscored opponents 10-1 in the playoffs, but its defense has been impressive as well. The Bulldogs contained a usually explosive Friendswood club in the Region III quarterfinals last Friday and pulled out a 4-1 shootout win.

Nederland is going for its first regional final appearance since losing to Friendswood in both 1999 and 2000. This is the second regional semifinal in three years for the Bulldogs, who lost to Leander Rouse 1-0 in 2017.

PNG, meanwhile, knows the regional tournament experience all too well.

The Indians, who’ve never played in the final round, are in semifinals for the fifth year in a row but have never scored a goal in that round (except in a shootout) during that streak. They can’t wait to try to rectify that against defending champion Kingwood Park (24-2-1).

“My girls are fired up, excited,” Bates said. “We had to wait a week. The anticipation has built up. I know when I wake up, I feel like, oh my gosh, is it gameday?”

The Indians’ defense — with Kaylee Landry, Callie Smith, Hannah LeBlanc and Kelsie Comeaux on the back line and Kaylee Hooper in the net — will have a serious test against Byrd. But it’s also the same defense that has shut out Crosby, Richmond Foster and Texas City in the playoffs, an achievement no other Region III survivor can boast from their past three matches (Nederland and Pflugerville have each allowed one goal, KP three in the past two).

PNG has netted four of its five playoffs goals in the second half and have had to come through in clutch situations the past two outings. Breeana Riggs bent a free kick in the net with 11 seconds left in an area round win over Foster, and Ariel Muller and Comeaux talled goals in the final 10 minutes against Texas City. Both games were contested at Barbers Hill.

“They’re not getting frustrated or halfway going through the motions,” Bates said of the Indians’ offense. “They have the mindset of, it’s hasn’t yet, but it will.”

That’s the feeling her team shares about finally playing for a ticket to the state playoffs.