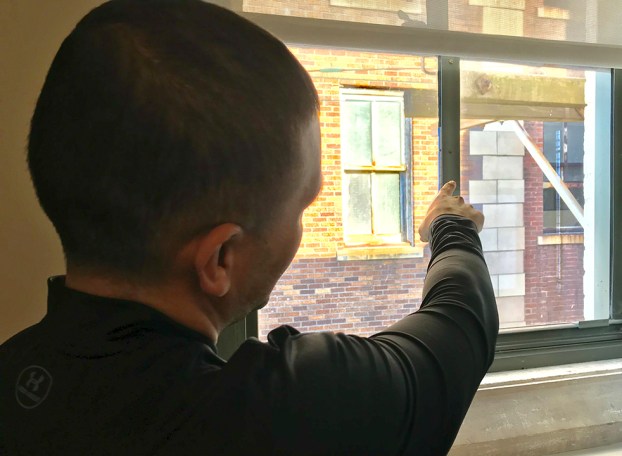 From his third-floor office desk in the downtown 501 Building in Port Arthur, architect Alam Farias has a bird’s eye view of the empty, decaying, six-story Adams Building.

A native of Mexico, Port Arthur raised, Farias said he’d often gaze into the window of the Adams Building directly across the alleyway from his office and wonder if anyone ever would look back at him.

The Adams Building, completed in 1926, and the Federal Building, built in 1912 and located across Fifth Street from the Adams Building, will become office space for Motiva Enterprises after the company completes renovations on both historic buildings. That announcement was made last week.

The 501 Building, the former First National Bank Building where Farias’ office is located, was built in 1930 and is also on the National Register of Historic Places.

He and others know what that will mean: Additional development in the sleepy downtown streets to service the influx of white-collar workers. It means a new restaurant or two, perhaps a bank presence, maybe a small pharmacy shop.

Farias said he’s heard lots of whispering in the two years he’s worked downtown, hopeful talk about a major move by companies like Motiva back to what used to be a thriving downtown. He said he’s heard it before, but there was enough conversation of late that it made him “optimistically skeptical.”

Last week, talk turned to action as Motiva exercised options for purchasing the downtown buildings. They hope to close on them within a month and begin construction soon enough to move office workers there within three years. City leaders believe other companies will follow Motiva downtown.

Farias said he talked with historical architects that did the “due diligence” on the buildings as Motiva weighed their purchase. He said they represent Haddon + Cowan Architects of Austin, a well-respected firm.

Farias described the Federal Building as “early classical,” a fitting fixture on the National Register of Historic Places. Motiva executives said they hope the Adams Building, too, which Farias described as “classical,” will gain some historic recognition.

The Federal Building, Farias said, has beautiful features. He was less impressed by the Adams Building, which he described as “just big and brown.”

He said the Austin architects that will work on the buildings hold a specialty in historic buildings. Farias and Architect’s Studio PLLC, which is his company, are doing work on the former Port Arthur News building on nearby Fourth Street, and are working through the process of preserving that building to complement the historic downtown area. That’s not easy, he said, in that that building was constructed in three phases.

Not so for the Motiva acquisitions, although the Federal Building had at least one major architectural transformation.

“I have a feeling they won’t change much in the exterior,” Farias said of the renovation. “They can’t change the facades and they will keep as close as possible to the original design.”

He said the details of the buildings are impressive: cornices, statues,“things we cannot replicate today.”

“These were handmade, chiseled,” he said. “You can do that, but it would cost a fortune in today’s technology and market.”

Nonetheless, he said, the opportunity to work on an historic building is precious.

“You get to keep something that was created a long time ago, bring it back to life.

An architect has a lot of work to do to figure out the best way to approach that.

“As an architect, you’ve got to respect what other architects have done.”

A Houston developer told the Port Arthur City Council on Tuesday that he wants to secure some 300-plus acres on... read more