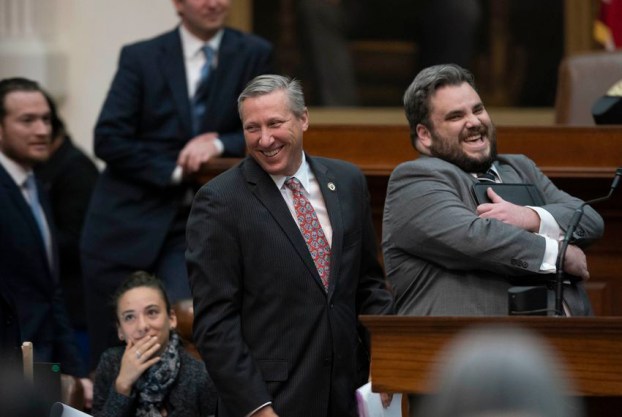 During debate on the House state budget bill, state Reps. Drew Springer, R-Muenster, and Jonathan Stickland, R-Bedford, laugh over Stickland's attempt to kill an amendment. Stickland, a member of the House Freedom Caucus, had clashed with Springer in past legislative sessions. (Bob Daemmrich/Texas Tribune)

By Emma Platoff
and Cassandra Pollock

They came out against an across-the-board pay raise for every teacher and librarian in the state. It passed the Texas Senate unanimously.

They railed against the upper chamber’s supplemental budget, a $9 billion proposal to pay for state expenses left over from the last legislative session. It passed unanimously.

And last week, when the Texas House took up a 2020-21 spending plan for the state, they exhorted lawmakers to vote “no” on the $251 billion proposal they called “bloated” and “fiscally irresponsible.” It passed unanimously.

Wednesday’s budget vote was the latest — and perhaps the most notable — example of the daylight emerging between hardline conservative groups like Empower Texas and the lawmakers they help elect, differences that have been apparent since Election Day. Last session, conservative activists saw their social priorities elevated by the lieutenant governor, and their strict fiscal preferences trumpeted by members of the hardline Texas House Freedom Caucus. But this year, as Empower Texans and others continue agitating for much the same priorities, their onetime allies in the Legislature don’t all seem to be on the same page.

That change comes on the heels of a midterm election that handed Texas Democrats more power than they’ve had in years, and the election of a new House speaker who has so far governed the lower chamber in a no-nonsense fashion. And it has continued to solidify as the state’s three most powerful elected officials project a united front as lawmakers focus on bread-and-butter priorities like property taxes and school finance instead of divisive social issues championed by those hardline groups.

“The grassroots are NOT happy, but the electeds are absolutely sure they are wiser than we are and will not listen,” said Julie McCarty, president of the Northeast Tarrant Tea Party, a prominent conservative group in North Texas, in an emailed statement to The Texas Tribune. “You know, we’re just the little people … What do we know?”

McCarty’s grassroots group and Empower Texans are just two of a host of conservative organizations that have, to varying degrees, criticized the Legislature — and in particular, the Republicans they typically align with — for the work done so far this year. Empower Texans — and its well-funded PAC — is known for playing in Republican primaries, as well as taking a position on certain votes, which the group uses to rank lawmakers “pro-” or “anti-taxpayer” on its “fiscal responsibility index.”

Some House Freedom Caucus members insist that groups like Empower Texans don’t have a role in negotiations that take place under the pink dome and, hence, can’t understand completely the motivations behind casting votes on certain pieces of legislation. And success for the caucus, as member Matt Krause, R-Fort Worth, put it, will be measured when the Legislature gavels out in a couple of months.

“The proof will be in the pudding,” he said.

A ‘fair shake’ for everyone

That approach, a departure from what defined the Freedom Caucus during the 2017 legislative sessions, is partially due to new House leadership that’s pledged to give every member in the lower chamber a fair shake in the process, members said in the lead-up to session. For the caucus, at least so far, that’s meant signing off on legislation members may disagree with in the name of “good faith,” instead of casting “no” votes on a bill that’s bound to pass anyway — a sign of renewed hope that they’ll ultimately end up represented at the negotiating table.

It has also meant working out differences with colleagues behind the scenes instead of publicly burning bridges with proclaimed political enemies on the House floor.

Nowhere was that sense of unity more obvious than the budget vote Wednesday night, when every House lawmaker signed onto the $251 billion proposal.

“We’re excited at our success tonight … with every member being a part of that,” House Speaker Dennis Bonnen, R-Angleton, told reporters after a relatively tame, but still lengthy, marathon debate. “Republican, Democrat, conservative, liberal — every member came together on how to make our budget be successful … [they] worked together to bring the budget home in a very positive way.”

“It felt like the Republicans have been turned French and equipped with a white flag,” Empower Texans CEO Michael Quinn Sullivan tweeted as lawmakers debated the budget. In an email to supporters the next morning, he lamented the size of the spending bill and its failure to deliver what he called “meaningful property tax relief” — but even more frustrating, he wrote, was “the failure of the Freedom Caucus to fight for it.”

The Freedom Caucus acknowledged after the vote that the current budget proposal isn’t ideal. But a handful of amendments the group successfully tacked onto the bill — such as one to ensure that a certain amount of dollars goes toward property tax relief, and another to secure $95 million for alternatives to abortion programs in the state — justified its stamp of approval.

“HB 1 is not perfect,” read a statement by state Rep. Mike Lang, a Granbury Republican and chair of the caucus, after the vote. “This vote was early in the process … [and] the passage of these amendments from Freedom Caucus members is a step in the right direction and an act of good faith.”

Despite that good faith, state Rep. Jonathan Stickland, R-Bedford, said after casting his vote for the budget proposal, “it was a bad day for conservatives.”

“I hope it’s not a foreshadowing of the rest of the session or the final version of the budget,” he told an Empower Texans-affiliated radio show.

Beyond the budget, hardline conservatives are unhappy with lawmakers’ approach so far on their biggest issue of the session — property taxes — which critics on the right say has focused too much on reform and not enough on relief. The major tax bills in both chambers would slow the growth of property taxes, but not directly lower homeowners’ bills. Other proposals would have a more tangible impact by compressing school district tax rates or increasing the homestead exemptions, but some groups consider even those efforts insufficient.

“There seems to be an effort among some in Austin to try to redefine ‘tax relief,’ hoping taxpayers are too stupid to notice their property tax bills are continuing to rise. That would be a mistake,” Sullivan wrote in a March 25 email to supporters. “Rather than just deliver on their promises to limit government and give tax relief, some in the legislature are playing semantic games. They want taxpayers to accept ‘reform’ as a substitute for relief.”

Disclosure: The Texas Public Policy Foundation has been a financial supporter of The Texas Tribune, a nonprofit, nonpartisan news organization that is funded in part by donations from members, foundations and corporate sponsors. Financial supporters play no role in the Tribune’s journalism.

This story has been edited for length.

By Emma Platoff The Texas Tribune texastribune.org After emotional testimony, a forceful show of opposition from leaders in the state’s business... read more