Port Arthur Mayor Derrick Freeman said Thursday that City Council members had no ironclad agreement this week to choose the next city manager based on a point system, although he said the seven councilmembers had used such a system in a closed meeting to help guide their choices. 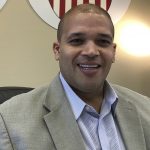 Three other councilmembers — Harold Doucet, Raymond Scott and Kaprina Frank — said Tuesday they believed that using such a system represented a pact that all councilmembers had made prior to the Tuesday meeting.

The council voted 4-3 following an executive session Tuesday evening to reopen the search for a city manager, a decision that left those in the minority apparently angry and frustrated. Doucet said that under the points system, former city employee Hani Tohme had narrowly finished first among four finalists for the job, the highest-ranking, non-elected Port Arthur leader. The city manager position pays $140,000 to $170,000.

Councilwoman Charlotte Moses offered a motion to reopen the search, which drew immediate, vehement opposition first from Doucet, later from Scott and finally from Frank.

Freeman said Thursday that those three left the meeting while the four other councilmembers — Moses, Freeman, Mayor Pro Tem Thomas Kinlaw and Cal Jones — were continuing to discuss a compromise, which resulted in the decision to reopen the search.

The mayor said the group downstairs agreed on the compromise moments before reentering the City Council chambers to resume their meeting in public.

Freeman said councilmembers were “trying to work it out, for now” before resuming the search. He also said he was uncertain if interim City Manager Harvey Robinson would stay on in his temporary role or leave his post and return to retirement. Robinson, a former assistant city manager, was hired in December 2017 to guide the city temporarily, but has remained in that position since while awaiting a permanent replacement.

Robinson said at Tuesday’s executive meeting that he was departing Friday; Freeman suggested in the open meeting later that Robinson might agree to remain. Should he leave, Freeman said, the City Council will likely replace him with another interim.

“We’re not exactly sure what is happening with that,” Freeman said. “We’re still deciding.”

The city will also seek additional candidates to add to its initial pool of 18 applicants. It will run an advertisement through April 17 seeking candidates with the following qualifications:

Candidates with at least five years experience in civil service law and collective bargaining and industrial district contract negotiations would also be favored.

A 71-year-old man is in “very critical condition” after his vehicle was struck by one of two vehicles that Port... read more