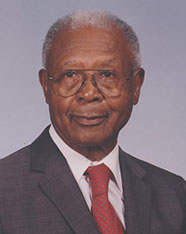 Sylvester was born November 11, 1917 in Opelousas, Louisiana to Leonard Chavis and Malisia Sinet.  He moved to Port Arthur, Texas as a young man to seek employment and also in search of a better life.  He was a World War II Veteran in the United States Coast Guard and, in 1940, began employment with Gulf Oil Company as a Merchant Marine where he gave 42 dedicated years of service.  He met and married Rosa Bobb, the love of his life.  They were married for 70 years. To this union were born four children: Cynthia, Leonard, Jessica and Sylvester, Jr.

He is preceded in death by his son, Sylvester Chavis, Jr. and his grandson, Ashton Goings.

He is survived by his wife, Rosa M. Chavis; his daughter, Cynthia Goings (Paul) and son, Leonard Chavis (Norie) of Port Arthur; his daughter, Jessica Jones (Karl) of Houston; six grandsons, Karl Jr., Kevin, Kwincy and Kendall (Jennifer) Chavis-Jones all of Houston and Keith and Kilian Chavis of Port Arthur; and three great-grandchildren, Kaelyn and Kai Kirchhoff-Jones of Kansas and Makayla Chavis-Jones of Houston. He is also survived by dear cousins, Curtis Joseph and Vivian Sneed; his close and thoughtful friend, Clifton Mitchell and a host of nieces, nephews, relatives and friends.

The family also wishes to extend a special thank you to his long-time caregivers, Gloria Guidry and Felicia Jones.

Funeral service will be 11 a.m. Friday, March 29, 2019 at Sacred Heart Catholic Church with visitation from 9 a.m. until service time.  Entombment will follow in Live Oak Cemetery.

Matriarch of the Family Caroline “Granny” (Oberle) Tollefson, 104, of Groves, died peacefully on Thursday, March 21, 2019 at The... read more