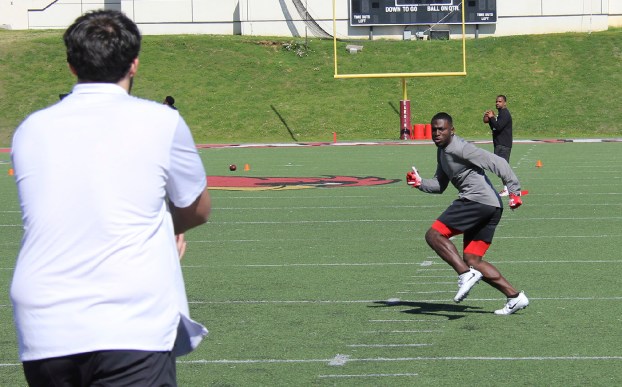 BEAUMONT – NFL scouts made their way to Beaumont on Wednesday morning to evaluate Lamar University’s 2018 senior class. For the seniors, the last time they stepped on this field, it was their final tune-up before facing Northern Iowa in the opening round of the NCAA FCS Playoffs.

The day started out in the LU weight room, where scouts tested players in the standing broad jump, vertical jump and bench press. The players then moved outside for the 40-yard dash, L run and shuttle run before breaking off into position drills.

Bowery, Jernigan and Randle recorded impressive vertical numbers, with Randle posting a 41-inch vertical. Jernigan had a 37.5-inch vertical, while Bowery recorded 31 inches from his offensive line position. Bowery also hit 31 reps in the bench press while Garner had 23.

Several players clocked strong 40 times including two members of the LU secondary – Randle and Jernigan. Randle posted a 4.28, while Jernigan clocked a 4:48.

The 2019 NFL draft will begin Thursday, April 25, and conclude Saturday, April 27.  If LU has a player sign a professional contract, it would be the second time since 2017 that Big Red has had a player further his playing career at the next level. That year, Langley was selected in the third round of the NFL draft by the Denver Broncos.

Several former players turned out to support their teammates, including Beaumont’s own Reggie Begelton. One of the all-time great receivers in program history, Begelton set numerous school records before being selected by the Calgary Stampeders of the Canadian Football League. This past year, Begelton was a member of the 2018 Grey Cup championship squad – the eighth title in franchise history.

Austin Schaper and Grant Rogers made it a priority to go to the same university to continue their baseball careers.... read more