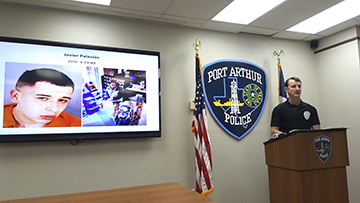 Port Arthur Police Det. Mike Hebert gives information about Javier Palacios, who is wanted for warrants and a suspect in a violent shooting. Mary Meaux/The News

Port Arthur police are hoping to get a known gang member off the streets.

Javier Palacios, 22, has an extensive criminal history and is a known member of the Sureño 13 street gang. He is sought on a warrant for unauthorized use of a motor vehicle and evading arrest with bonds totaling $100,000, and a case is being filed for felony possession of a firearm for a different incident. 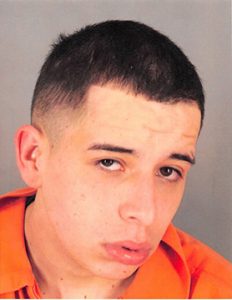 Port Arthur Police held a press conference on Tuesday at the police station to discuss a recent crime spree.

On March 4, Palacios was reportedly driving a stolen vehicle when officers attempted to stop him just after 1 a.m. He led police on a foot pursuit before being captured and taken into custody. A .38 caliber pistol was found at the scene.

Then on March 18 police received a call from a man who was getting gas at a store at 3649 Gulfway Drive that saw another man display what he believed to be an assault rifle, either an AR-15 or AK-47, Port Arthur Police Det. Mike Hebert said.

“The reportee did not want to come in (and give a statement,” Hebert said, likely for fear of retaliation. 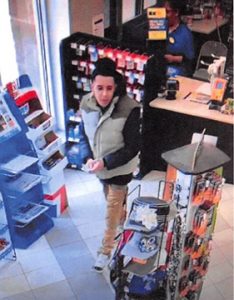 Port Arthur police have identified this man as Javier Palacios who reportedly displayed an assault rifle at a store customer on March 18.
Photo courtesy of Port Arthur Police Department

Store surveillance was checked and it showed Palacios inside sporting a blue bandana in his back pocket.

Palacios, who police say has a drug abuse problem, is a suspect in a brutal shooting that took place around 8:16 a.m. on March 23 in the 1200 block of Delaware. Police were called in reference to shots fired and found a male victim had been shot multiple times in the lower extremities, he said. The bullets used were 7.62 mm caliber, “conducive with an AK-47.”

The code of the streets

The victim of the March 23 shooting was rushed to a local hospital and police were told he might have to have one leg amputated. The victim, who is an acquaintance of Palacios, does not wish to file charges.

“For us, it’s like you were shot with an AK and will lose a leg and still won’t file charges,” Hebert said.

But this tends to be the norm.

“It’s not so much fear but street code. People see it as snitching,” he said.

Hebert said there has been a downturn in gang crimes until recently and that Palacios touts his affiliation with gangs while others prefer to slide in under the radar.

“We do have gang issues in the city,” he said. “He’s (Palacios) an example of going to the pen and coming out and resuming what he did before.”

A gang injunction is loosely a restraining order against a specific group or gang and a civil suit which seeks a court order declaring the gang’s behavior a nuisance. The injunction was put in place in 2014 and a countywide gang injunction was created in 2015 with area-specific conditions. Nine local men believed to be members of gangs were named in the suit. Should they break any of a long list of rules they will face jail time and hefty fines, according to an archive story.

Palacios was the first conviction from the gang injunction, and in May 2015 — at the age of 18 — he pled guilty to violating five of the conditions of the civil lawsuit brought against nine of the members of the Sureños 13 gang. He was sentenced to 300 days in jail and fined $2,000.

PAPD and the U.S. Marshals Service have been seeking Palacios and police are now asking for the public’s help. Anyone with information about Palacios can call the PAPD at 983-8600 or can report information anonymously to Crime Stoppers at 833-TIPS or by downloading the mobile app — P3 TIPS. callers don’t have to give a name and could receive a cash reward for information about the case.

Staff report You can dress the 3 Redneck Tenors up, but you can’t make ‘em formal. They wouldn’t let that... read more