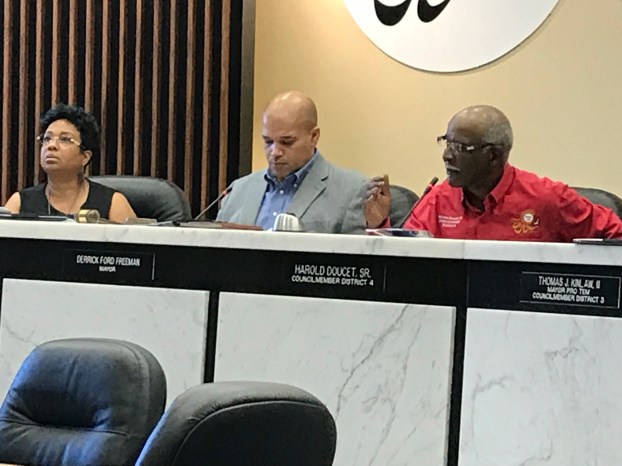 And then there were none: Council to reopen manager search

The decision generated some exasperated, if not angry, words among councilmembers, and more emotion than most issues that have passed the council’s way for several months.

Four finalists were selected almost a month ago for the job of city manager, which is the highest ranking, non-elected city position. All were interviewed in City Council chambers Feb. 27:

Doucet seemed most certain to support Tohme — he had spoken glowingly in the past about Tohme’s unyielding efforts to demand accountability from his workers. Tohme seemed to meet with apparent success at every turn in two other city roles — first overseeing the water department and trash pickup and later adding oversight of the street program.

Asked what happened to that agreement in the meeting, Scott said, “Politics.”

“I highly appreciate the opportunity that the city of Port Arthur gave me during the last 14 months,” Tohme said in a message. “My employment served two objectives: It proved my strong leadership abilities, that an effort had been made to pollute in the last four years.

“It proved that the city of Port Arthur can quickly move into the 21st century with ethical and dedicated leadership that puts the citizens’ best interests first.

“I do not know what the future holds, but I know God must have a better and bigger plan for my career and to Him I give all the glory.”

Tohme had formerly worked many years in administrative posts for the city of Beaumont, but left under duress.

The meeting also seemed to split councilmembers along two schools of thought. Doucet said councilmembers can only choose from among those candidates who apply. Nor can councilmembers ever be certain, he said, that any chosen candidate would succeed, no matter who the candidates are. The best course, he said, was to choose the best candidate among the available group and move forward.

Scott said all four final candidates “were good until the process was completed.” He said that councilmembers among themselves made no objections to any of the four finalists as being unqualified.

“Someone is playing politics with the people of Port Arthur,” Scott said.
Frank, customarily cool, appeared exasperated by the council decision.

“I am just totally confused. We had a process,” said Frank, who was on the council committee to review the candidates. “What would change?” she asked, by additional time in the process.

Moses suggested that three months was not enough time to select the right candidate. She said she worked human resources for 20 years, and it was not uncommon to search for more than three months for the right person.

Freeman said one danger in selecting the wrong person is that separation packages for high-ranking positions such as city manager result in payouts of “hundreds of thousands of dollars,” money the city needs to conduct the people’s business — such as building streets.

Uncertain was whether interim City Manager Harvey Robinson would stay on. He was coaxed out of a nine-year retirement to serve in a temporary role that was to last six months. He’s served 16 months; councilmembers said he told them Tuesday night that he would leave his interim job Friday.

But Freeman said later Robinson said he might stay on a while longer.

Robinson attended the executive session, but did not remain for the regularly scheduled meeting. Assistant City Manager Ron Burton took his seat on the City Council dais.

So did you miss me?: Patrons show enthusiasm as renewed library reopens

The excitement from this weekend’s grand reopening of the Port Arthur Public Library was still obvious Monday when talking to... read more