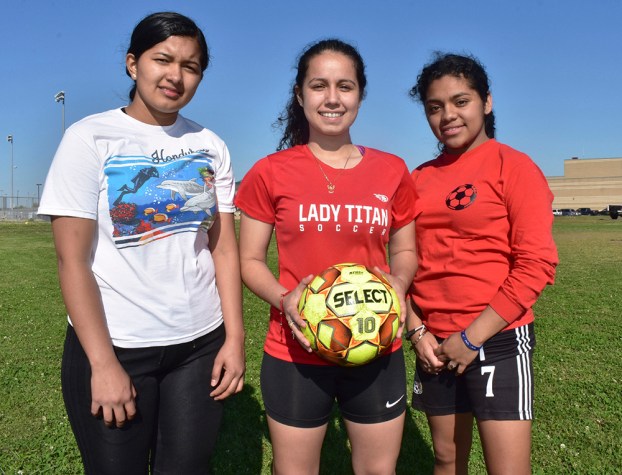 GIRLS SOCCER: No more waiting: Lady Titans back in playoffs after nearly decade away

“She was all excited about it whenever they had gone,” Banda said. “She was telling me that all these different teams, they got to meet different people, and got to combine their skills with other people.”

“They wish they could have gone farther, but it stayed at that,” Banda recalled.

The Lady Titans (8-13-1, 4-8 in 21-5A) secured a playoff spot last Tuesday with a 2-1 overtime victory over Cleveland and await their matchup in the upcoming 5A playoffs.

Whatever pressure the Lady Titans faced turned into jubilation after the playoff clinch, images of which were caught on Twitter-posted video.

“The emotions came out,” Garcia said. “Not knowing how the team was when I came in … that’s the goal, district championships and playoffs; that’s why we do it.”

The bi-district round will be held Thursday-Saturday, but the opponents have yet to be determined due to the Intercontinental Terminals Co. fires in Deer Park that have affected schools and delayed matches in District 22-5A.

Memorial, which finished fourth in 21-5A, will have to rebound from a 4-0 loss at Dayton in Friday’s regular-season finale. Junior Guadalupe Contreras (16 goals, two assists on season) and senior Jatsari Morales (10 goals) will seek to reignite the offense.

“I just want to get my seniors to the playoffs,” said Contreras, a two-year captain. “I know it’s something they want to do and I want to do as well, and what better than to go with the people you love?”

Said Garcia: “She’s the definition of a team player. I remember one year, we gave her off [from practice] for her birthday. She showed up. She didn’t want to take off.”

Garcia has taken a young team that includes six freshmen — making up one-third of his varsity roster and turned them into a playoff team. Three of the freshmen start.

Sophomore Yanaris Castillo is a stalwart goaltender with 70 saves, and she backs up a senior-oriented defense led by 2018 District 22-5A first-teamer Blanca Orozco, two-time all-district player Banda and Elissa Bonilla. Garcia said those defenders have taken the younger players under their wings and helped their game improve.

“I say, for the playoffs, we’re young, fast and have nothing to lose,” Garcia said. “… Our seniors have really stepped up. They helped these juniors out a lot. That was one thing that really helped.”

The success of Memorial girls and boys soccer — the boys team earned their first-ever playoff victory last year — has a trickle-down effect to the middle school levels. Garcia said seventh- and eighth-grade soccer programs will begin next month, which which should help build Titan soccer for the future.
•
I.C. Murrell: 721-2435. Twitter: @ICMurrellPANews

NEDERLAND — Conner Kemp was suited for a game like this. The left-handed Nederland senior struck out seven batters and... read more