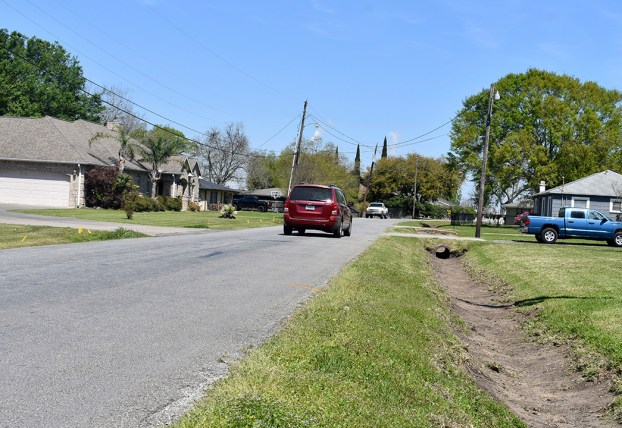 Vehicles pass down the busy Port Neches Avenue in Groves after city crews re-dug the ditches on one side of the road Friday. (Mary Meaux/The News)

GROVES — With drainage a major topic of concern in the city of Groves, communication is a must.

Residents have filled council chambers off and on in the year-and-a-half since Hurricane and Tropical Storm Harvey dumped historic amounts of rain on the area; they’ve been voicing their concerns. And recently, city administrators began sharing a list of drainage jobs with color-coding to show which ones have been completed.

Groves City Manager D. Sosa said public works director Troy Foxworth will give a progress report every month during council meetings. The list — it can be accessed on the city’s website — shows completed jobs listed in red ink and work to be done in black ink.

“This is a way to keep the public informed of where we are at,” Sosa said. “We get calls all the time and are trying to have some sort of informational data that can be updated.”

While it may appear the jobs are being taken out of order, it is not cost efficient to do four or five jobs, then jump across town to work, then come back for one or two.

Sosa said crews use lasers and reset the grade lines and cut to improve the flow of water.

Small yellow, orange and red flags dot some of the areas to be dug. Foxworth said the flags are markers for certain lines — yellow for gas, orange for cable or phone and red for electric. The markings are good for up to two weeks and after two weeks, if nothing is done, the homeowner may pull them to cut grass.

On Friday, the city’s crews were working on Port Neches Avenue. Resident Britney Guidry said she heard the trucks at about 6 a.m. She said they did a good job.

Tattoo who? Parlor vote on Monday

NEDERLAND — The Nederland City Council will decide the short-term fate of the building’s occupancy at 2826 Avenue H on... read more