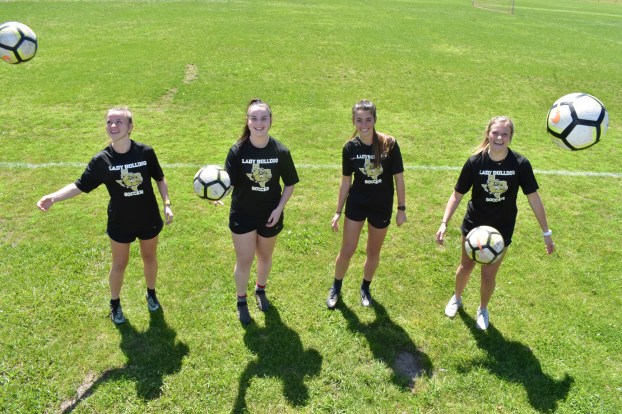 GIRLS SOCCER: All to themselves: Nederland stands alone atop District 21-5A

And no one is sharing the District 21-5A crown the Bulldogs just wrapped up.

“When you talk about programs in the area, we’re one of the top ones,” Tomplait said. “I got very lucky and fortunate to come into this job, and every day, I remind myself of that. It’s a great feeling to be a part of something so special.”

Not too many teams post 15 defensive shutouts, due in large part to the play of freshman Morgan McBride and sophomore Amber Borel, and outscore opponents 85-11 like the Bulldogs (19-1-3, 11-0-1) have this season.

“The most enjoyable part is probably, like, going as far as we have so far and winning all our games and just getting closer as a team and forming a better bond with each other,” senior Phoebe Short said. “The team chemistry has gotten so much better over the years.”

Short, along with fellow seniors Meg Sheppard, Destyn Miguez and Skylar Thomassie, have been among the nucleus of a team that has gone 39-5-4 overall and 23-2-1 in district play under Tomplait. Nederland last lost a match in regulation or overtime on Jan. 18 to Atascocita, 2-0, and has gone 12-0-2 since.

Nederland shared the 2018 District 22-5A championship with Port Neches-Groves and had the No. 1 seed but fell in the second round of the UIL 5A playoffs to Texas City.

“I think we were all expecting to have a really far playoff run last year, and it was cut short, so we felt like we had something to prove, like coming back knowing we’re capable of going so much further,” said Thomassie, who along with Short has five goals apiece.

The Bulldogs have completed their regular season and just awaiting their bi-district matchup against the fourth seed from 22-5A. But Tomplait said the teams in that district have not been able to play this week due to the Intercontinental Terminals Co. fire in Deer Park.

March 26 is the deadline to finalize district standings, with bi-districts to be held March 28-30.

Whoever draws Nederland will have to contend with Sheppard, a Lamar signee who has 32 goals and nine assists on the season. Sheppard pulled three of her four hat tricks three times in the past 34 days (Nederland was off one week for spring break).

“But then, I just got moved back up to forward, and I’m just kind of back into my groove, I guess,” she said, drawing laughs from her teammates.

Meanwhile, Miguez — who’s going to LSU-Eunice along with Short — has become known for her assist ability in recent games after years as a defensive specialist, a role she also held while playing volleyball with Thomassie and Sheppard.

“I am more defensive-minded, but since I’ve been playing in midfield and out wide and anywhere offensive, my mind has changed from a goal-scoring aspect to protect the goal to more of scoring,” said Miguez, who has four goals and about nine assists.

Thomassie has drawn the attention of Division III LeTourneau University in Longview and will sign with the YellowJackets on Friday.

“A lot of it was impacted by the actual community of the college,” she said. “It’s a Christian college, and that really impacted making a decision college-wise. I went to go watch a game, and the coach [John Antonisse] was so welcoming and I felt that I was already part of the team. Seeing the chemistry the girls had and knowing how far he’s come from helping them from having no wins to being in the conference playoffs and just seeing them grow made it appealing.”

Despite the Bulldogs’ defensive prowess, Tomplait said the team will re-evaluate “how we’re doing some things” on that side of the ball in preparation for the postseason.

“We started from scratch at the beginning of the year with our identity,” he said. “When you go into the playoffs, you want to make sure you still have that identity and everyone’s on the same page. They’re all way more important in the playoffs.”