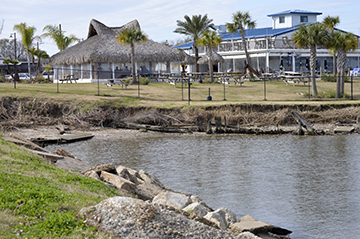 PORT NECHES — Another step has been taken to keep erosion at bay along the riverfront here.

Last week, Port Neches councilmembers approved a change order for additional work associated with a revision in the erosion barrier design. The additional work, which includes the costs of engineering of the sheet pile structure, property management and project inspection comes in at $98,635 for a new contract total of $248,962. The professional service agreement is with LJA Engineers Inc.

Previously, the city wanted to construct a rock revetment or breakwater about 30 feet off the existing shoreline. Since the state of Texas owns the waterway, the city had to apply for a lease with the Texas General Land Office.

The lease was approved in December 2018 but certain stipulations were included that had not been previously discussed and of which the city staff and the engineering firm were not aware, according to a city official. Part of the new stipulations was a requirement to remove derelict structures from the water as well as establish a timeframe for completion of the work.

But the city doesn’t have funding to remove the structures and can argue that since they are in the water it is the state’s responsibility for removal.

The city opted to go with sheet piling in a January meeting.

The area in question is about 700 feet, starting at the stormwater outflow between the Neches River Wheelhouse Restaurant and Port Neches Riverfront Park parking lot. The total length would be determined based on the available budget.

Every year, the city loses about a foot of shoreline along the river, and during Hurricane and Tropical Storm Harvey the city lost about 6 feet of land to erosion.

GROVES — It’s official: After more than three years in limbo, talks of a bond issue are back for Port... read more