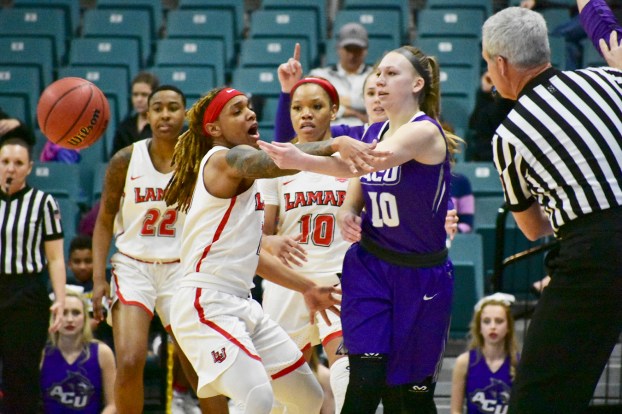 Moe Kinard of Lamar tries to stop a pass by Breanna Wright of Abilene Christian in the third quarter Saturday in Katy. Kinard scored 34 points, and Wright had 31. (I.C. Murrelll/The News) 3-16-19 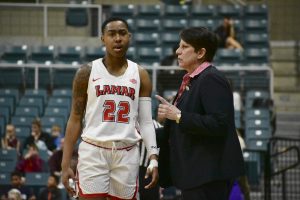 Miya Crump of Lamar expresses frustration over a foul call as coach Robin Harmony gives her instructions during the third quarter against Abilene Christian on Saturday. (I.C. Murrell/The News) 3-16-19 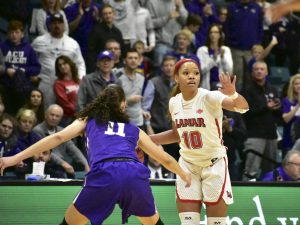 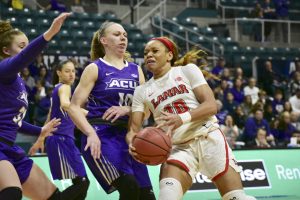 Chastadie Barrs of Lamar spins toward the basket as Breanna Wright of Abilene Christian defends in the third quarter Saturday in Katy. (I.C. Murrell/The News) 3-16-19 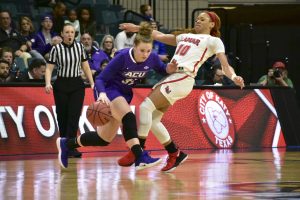 Madi Miller of Abilene Christian knocks down Chastadie Barrs of Lamar in the third quarter Saturday in Katy. No foul was called. (I.C. Murrell/The News) 3-16-19 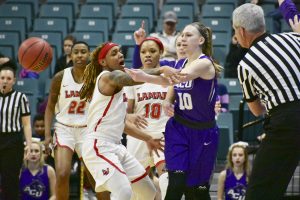 Moe Kinard of Lamar tries to stop a pass by Breanna Wright of Abilene Christian in the third quarter Saturday in Katy. Kinard scored 34 points, and Wright had 31. (I.C. Murrelll/The News) 3-16-19

KATY — What is it about the Southland Conference tournament’s semifinal round, where Lamar has continued to stumble?

“I think the week off does hurt us,” coach Robin Harmony said. “If we came here and played Wednesday, it wouldn’t be such a rest, but the other time, it gets you to where you can rest.”

Still, as Harmony pointed out, not all of her key players played their best games at the same time, one week after closing out the regular season with a home win over McNeese State.

Since last winning the Southland in 2010, the Cardinals have not made it past the round of four in six tries. Fourth-seeded Abilene Christian continued the slump for Lamar, coming back from 56-46 down to beat the back-to-back regular-season champions 88-79 on Saturday inside the Leonard E. Merrell Center.

“I think our kids played a really good three quarters of basketball,” Harmony said. “In the last quarter, the wheels came off us.”

Abilene Christian (22-9) rode the 31-point performance of junior guard Breanna Wright and overcame a 34-point outburst from Lamar senior guard Moe Kinard. Wright shot 16 of 16 in free throws, her makes setting a Southland tournament game record and surpassing Lamar’s total makes (13 of 20). She also made 6 of 10 from the floor (3 of 5 from three-point range).

“I love free throws,” Wright said. “It’s something we compete in practice every day, just as a team, whoever can make the most free throws in friendly competition. Obviously on the court, it’s a lot different situation. Your teammates are everything at that moment, and that’s what really helps honing it in.”

The Wildcats will face Texas A&M-Corpus Christi in Sunday’s title game, which will tip off at 1 p.m. CBS Sports Network will carry the game live.

Lamar (24-6) is expected to receive a Women’s National Invitation Tournament berth instead of the NCAA tournament spot it hoped to secure with a Southland tourney title. The Cardinals are 51st in the Ratings Power Index, but can boast a win over current No. 17-ranked Texas A&M in College Station on Nov. 29.

Foul shooting came back to haunt the Cardinals. They made 3 of 8 in the fourth quarter, missing three in a row at one point.

“I don’t think they can play again and shoot 66 percent from the field, 80 percent from three-point land and 93 from the free-throw line,” Harmony said, citing ACU’s fourth-quarter percentages. “I thought we were even right there. We’ve obviously got a short bench and we were probably tired. You know, we just ran out of steam.”

Attacking the basket all game, they found ways to put the Cardinals in foul trouble and eventually get two of Lamar’s point guards, Jadyn Pimentel and Chastadie Barrs disqualified. Lamar was whistled for 25 fouls to ACU’s 16.

“Our style is that we play very aggressive,” Kinard said. “When we play aggressive like that, you can’t do nothing about the calls and stuff. We’re always going to play aggressive because that’s how we play. Things just didn’t go our way.”

Wright scored 19 of her points in the fourth quarter, 14 coming at the line. She made a pair with 3:52 left following Pimentel’s fifth foul to give the Wildcats a 69-68 lead, their first since 8-7 in the early going.

Meanwhile, turnovers plagued the Cardinals in their half-court offense, and the Wildcats took advantage by going to the rim. ACU built a 9-0 run capped by a Makayla Mabry three-point basket and Wright shot, both off steals, to lead 80-70 with 47 seconds remaining.

“I think a lot of the mistakes that happened were on our end,” Kinard said. “We kind of defeated ourselves. We had a lot of turnovers and bad decisions on our end. We did see some pressure, but it’s not something we hadn’t seen before.”

Kinard was not going away quietly. She sank 3 of 3 three-pointers in the following 36 seconds, but only pulling Lamar to within 84-79.

“When you give me space, I will shoot the ball,” she said. “I just play according to what my style is, so I just kept going.”

Through three periods, Lamar was still ahead 58-52.

Umaja Collins neared a double-double with 12 points and eight rebounds for Lamar. The freshman made 6 of 8 from the floor.

Classmate Miya Crump and senior Barrs each had 10 points. Barrs also made 10 assists as she tried to overcome a 4-for-12 shooting game from the floor.

Still, on this day, ACU’s performance was more than good enough for coach Julie Goodenough.

“To be able to score 88 points against Lamar is phenomenal,” she said. “… I have the utmost respect for Lamar and their players on the team. They’re phenomenal offensive weapons, but they make a living off their tough and scrappy defense, which makes this game sweeter for our team to be able to handle that.”

As the Lamar Cardinals can only ponder what’s in their immediate future, associate head coach Bobby Kummer hit the rewind... read more