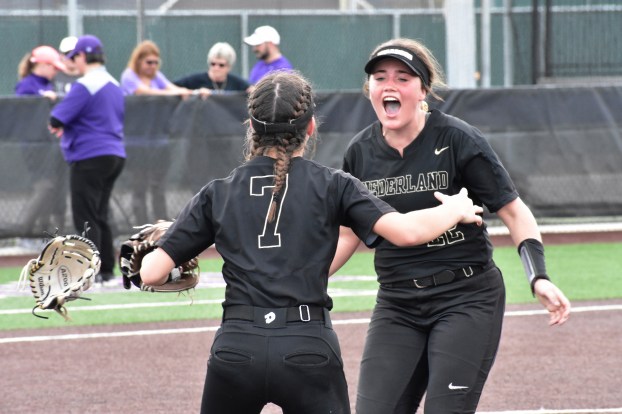 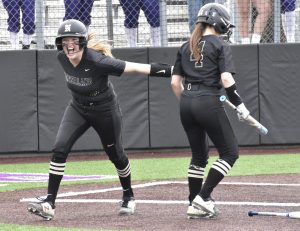 Harlee Brown of Nederland celebrates scoring the go-ahead run in the top of the seventh as Tori Morrison comes to the plate Monday in a 1-0 win at PNG. (I.C. Murrell/The News) 3-11-19 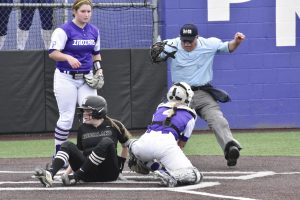 Harlee Brown of Nederland slides home safely on a double by Danielle Richardson (not pictured) and avoids a tag by PNG catcher Alexus Finn in the top of the seventh inning Monday. PNG pitcher Cameron Niedenthal backs up the play. (I.C. Murrell/The News) 3-11-19 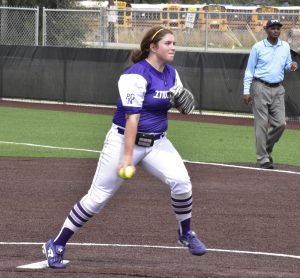 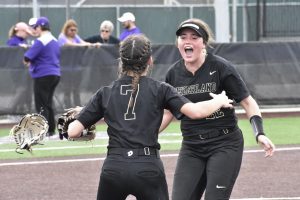 PORT NECHES — Destini Trahan was certain someone wearing black would push through a run.

She tossed 14 strikeouts to give Nederland a shot at its first win over Port Neches-Groves in two seasons.

“I think it had a lot to do with my team backing me up,” Trahan said. “They had me through the whole game. We just had a good time.”

Danielle Richardson made it a happier time for the Bulldogs.

The sophomore pinch-hitter sent a double past first base with two outs and Harlee Brown across the plate for the lone run in Nederland’s 1-0 rivalry win on Monday, the beginning of spring break for both high schools.

“I was really just focusing on my team at that point,” Richardson said.

Said Bulldogs coach Will Mallette: “Just for a kid to come off the bench in a pinch-hit situation and get a big RBI like that, that’s a hard thing to do, to come off cold in that kind of situation with the game on the line and get a base hit.”

Monday’s win allowed the Bulldogs to stay within a half-game of district leader Barbers Hill. PNG (13-5, 2-1) had won four in a row.

“I think team chemistry really won this game for us,” Trahan said.

Hannah Grumbles led off the top of the seventh with a single, but the Bulldogs hit into groundouts on the next two at-bats. Sierra Wiltz reached base and Brown advanced to second on an error at third to bring up Richardson for Nederland’s breakthrough.

Trahan threw a perfect bottom of the seventh, striking out the last two batters for the complete-game win.

“She just gives us an advantage a lot of teams don’t have,” Mallette said. “I think these two teams are pretty equally matched defensively, and she’s a difference maker. She really is.”

Cameron Niedenthal, who tossed five strikeouts in the complete-game loss, threw a perfect 4 1/3 innings before Trahan reached base on an error at third. Brown ended Niedenthal’s no-hit bid on the next at-bat, but Niedenthal got out of trouble with a K and a groundout.

“I think Cameron did a great job today,” Indians coach Jessica Lemoine said. “I think they got one hit to the outfield, and that was kind of a flare. Everything else was ground balls, and you can’t ask your pitcher to do anything more than that. It’s very rare you’re going to strike out everybody that comes up, but if she’s getting us ground balls, we’ve got to make better plays for her.”

The Bulldogs slapped four hits for the game, as Allysa Collazo singled in the sixth. Trahan allowed three hits, two of them by Niedenthal and the other by Sadie Shrestha.

Niedenthal’s pinch runner, Abbie Romero, was in scoring position following both of her singles. Trahan tossed three strikeouts in a row after allowing Niedenthal and Kasidee Sartin (fielder’s choice) on base in the fourth, and Romero was stranded at third in the sixth after Trahan retired the next three batters.

“I just don’t think our offensive approach was how it needed to be,” Lemoine said. “With the pitcher like Nederland has, she’s going to hit her spots and she’s going to move the ball around. You have to be more disciplined, and unfortunately for us, we fell right into her strengths today.”

On Tuesday, Nederland will visit Cleveland (noon start) and PNG will travel to Memorial (12:30 start). Both Nederland and PNG will return to action on March 19.