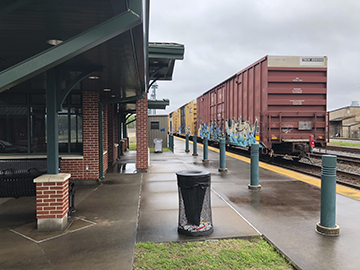 Local, area and statewide entities are getting behind a push to ask Amtrak to begin daily Sunset Limited Service.

Currently the service operates east to west three days per week and travels from New Orleans, through Beaumont and Houston to San Antonio and El Paso, to Tucson, Arizona, and then on to Los Angeles.

The Rev. Sinclair Oubre is one of the people in favor of the change.

“When I tell people I’m taking the train they look at me in a glassy-eyed stare,” Oubre said with a laugh.

Oubre has been known to take a train to New Orleans for an event, then have to wait days before a return train makes its way back. And he said there are perks to taking a train as opposed to driving or flying; in coach there are large seats, lots of legroom and the prices are affordable. Upping to first class comes with a higher price tag but includes more amenities and is restful.

Trains offer an observation car and views of the countryside, which can be hypnotic, he said.

Oubre has lent his voice to the efforts of the Texas Rail Passengers Association.

Supporters of the daily train service

Daily service along Texas’ southern tier counties means a transportation choice, as many of these towns and cities do not have direct air service to connect between them, according to information from the Texas Rail Passengers
Association. In addition, states served by Sunset along the Interstate 10 corridor have seen a population increase of 22 percent.

The daily service would mean increased economic opportunity and tourism growth, a safe, affordable and reliable alternative to automobile and air travel, and a future opportunity to add shorter distance corridor trains such as San Antonio-Houston-Beaumont for additional service.

More about the service

Bruce Ashton, president of TRPA, is putting together a package showing the support they’ve received on the issue and will take to Washington, D.C., on April 2. He hopes to visit with lawmakers on the importance of the issue and show support for the project he has garnered.

Currently Amtrak is the only nationwide passenger rail company. Amtrak only runs on their own rails in selective areas and the vast majority of tracks are owned by freight lines which include Union Pacific and BNSF in Texas and throughout the west and mid-west. Amtrak also runs on tracks owned by other companies as well.

Amtrak was created by Congress in 1970 to take over the majority of the intercity passenger rail services previously operated by private railroad companies in the United States, according to information from Amtrak.

Amtrak itself sees the change to daily Sunset Limited Service as a positive and are hoping to open the lines of communication with Union Pacific once again.

Instead of six trains per week there would be 14 going each way daily which would improve the company’s financial performance.

Body camera and dash camera videos of the fatal officer involved shooting of Shayne Lyons was made public on Friday... read more