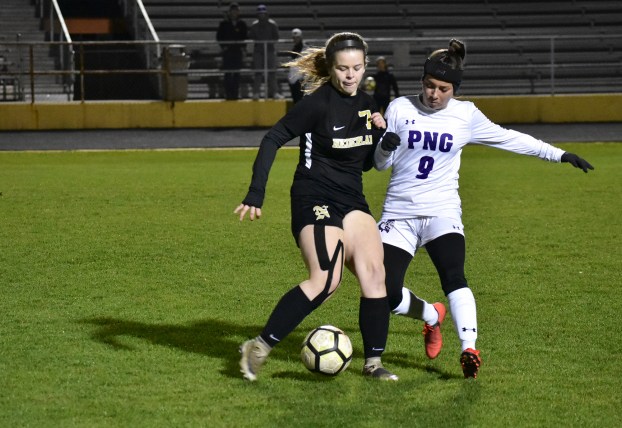 Brynn Landry of Nederland and Grace Richard of PNG battle for possession during the first half Tuesday in Nederland. (I.C. Murrell/The News) 3-5-19 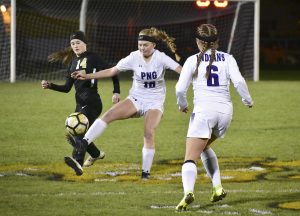 Tori Cutright (16) of PNG controls the ball against Hailey Dugas of Nederland late in the first half Tuesday in Nederland. Jordan Minaldi of PNG looks on. (I.C. Murrell/The News) 3-5-19 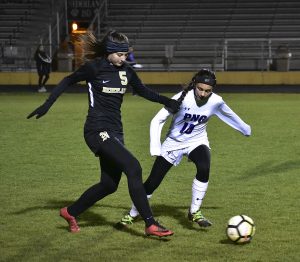 Haley Plumley of Nederland and Breeana Riggs of PNG run down a loose ball in the first half Tuesday in Nederland. (I.C. Murrell/The News) 3-5-19 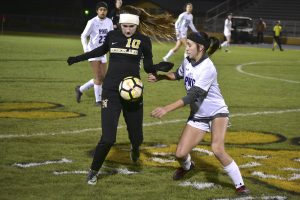 Hanna Foster (10) of Nederland controls the ball as Kaylee Landry of PNG defends late in the first half Tuesday in Nederland. (I.C. Murrell/The News) 3-5-19 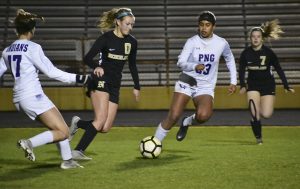 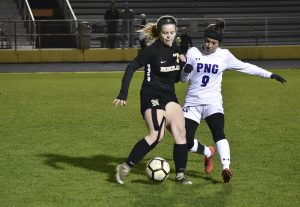 Brynn Landry of Nederland and Grace Richard of PNG battle for possession during the first half Tuesday in Nederland. (I.C. Murrell/The News) 3-5-19

NEDERLAND — Five combined goals in the first half were a far cry from the 1-0 tilt Nederland won in Port Neches on Feb. 8.

In the midst of 43-degree air Tuesday night, Port Neches-Groves added a sixth. And four more after two overtimes.

This one mattered more, after all.

Grace Richard, Ariel Muller, Kaylee Landry and Hannah LeBlanc converted all of PNG’s kicks in the shootout. Kaylee Hooper made a save against Meg Sheppard, Destyn Miguez converted for Nederland, and Lauryn Hughes hit the left post.

Nederland trailed 2-1 before Hanna Foster kicked in a loose ball in front of her defender with 10:22 left in the first half. Sheppard gave the Bulldogs the 3-2 lead with 3:34 remaining making a stop atop the penalty box and firing right into the net.

The Bulldogs went ahead first in the 10th minute after Skylar Thomassie scored off a rebound, but PNG answered 3 minutes later when Ariel Muller fired from 20 yards out.

Neither team could capitalize off open shots until Zoe Scroggs headed in a goal off a long-range assist at the 17:54 mark to put the Indians ahead.

Both teams traded open looks in the second half without moving the score until Riggs cashed in on her opportunity. Hooper and Nederland’s Morgan McBride and Hooper made several crucial saves in a rare offensive battle for this rivalry.

Sheppard nearly gave the Bulldogs the lead with 1:21 left in the second overtime period, but her shot from the top of the arc just sailed over the crossbar.

Nederland still needs just one victory to clinch the district title. The Bulldogs will host Cleveland on Friday and take spring break off before closing the regular season at Dayton on March 19. PNG will host Memorial on March 8, visit Barbers Hill on March 19 and host Vidor on March 22.

In boys action at PNG, the Indians beat the Bulldogs 2-1.

**REVISES records to reflect District 21-5A policy of awarding a tie for a district shootout to each team involved.**

NEDERLAND — Five combined goals in the first half were a far cry from the 1-0 tilt Nederland won in... read more