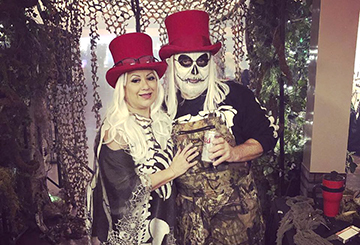 MARDI GRAS: There’s a new krewe in town so look for the Hoodoo Man

Keep an eye out for the Hoodoo man during Mardi Gras of Southeast Texas this year.

He’ll be recognizable with his red top hat and skull face.

Hoodoo is the mascot of the newly formed Krewe Le Bon Vie, “the good life,” and is a nod to Alice Thibeault’s love for the Day of the Dead, or Dia de los Muertos.

Thibeault started mulling the idea of starting her own Krewe right after last year’s celebration. Her husband guy is now retired and she doesn’t man a booth anymore selling her custom hats so now she has the time.

She decided to “bite the bullet” and with the popularity of social media, soon had loads of interested folks.

“The response was crazy. These are people anywhere from classmates to new friends to young people. It runs the gamut,” Thibeult said. “Pretty soon we were up to 85 members for our first year and I can see that doubling because we had so many members bring guests to our ball and everybody went away saying they wanted to join.”

She believes the main draw is he fact that Krewe Le Bon Vie is a casual Krewe and the fact she is into skeletons and Day of the Dead.

The upcoming parade will be eye catching, to say the least. Krewe members will be wearing their red top hats and either skeleton makeup or skeleton shirt.

“We have a voodoo kind of funky vibe and I think that’s a draw for a lot of people,” she said.

Krewe Le Bon Vie will have three floats and lots of newbies who have never been in a parade before which should make for a fun time.

The Krewe recently held their first ball and this year’s theme was “Hoodoo on the Bayou.” The event was held at The Courtyard Café in Groves and the group feasted on Cajun food, she said.

Musical entertainment was provided by Flava and there was about 100 people in attendance.

Both Thibeault and her husband were born and raised in Port Arthur and now live just down the road in Nederland. They are hoping to get people really excited about Mardi Gras again.

The Krewe will begin accepting memberships after this Mardi Gras, likely in May, and it will be done through Facebook.

Krewe members will be able to get together for different events – a ball which will be casual, maybe a bus trip for beads or a trip to the Texas Renaissance Festival but all that’s up to the Krewe.

If Paula Singleton’s family is losing faith in Port Arthur police and the city of Port Arthur, who could blame... read more