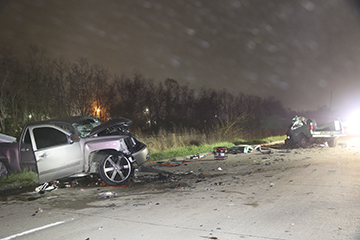 A two-vehicle head-on wreck that left both drivers dead last week has been ruled accidental.

The wreck happened just before 6:30 p.m. Feb. 22 in the 6100 block of West Port Arthur Road. According to police the driver of a green Ford F-250 truck, identified as Mark Anthony, 47, of the Port Acres area, crossed over into the other lane of traffic and hit a Chevrolet Silverado driven by Aaron Breed, 48, of Port Arthur.

Port Arthur Firefighters responded to a house fire in the 2900 block of Sixth Avenue about 10:20 a.m. Thursday. No... read more