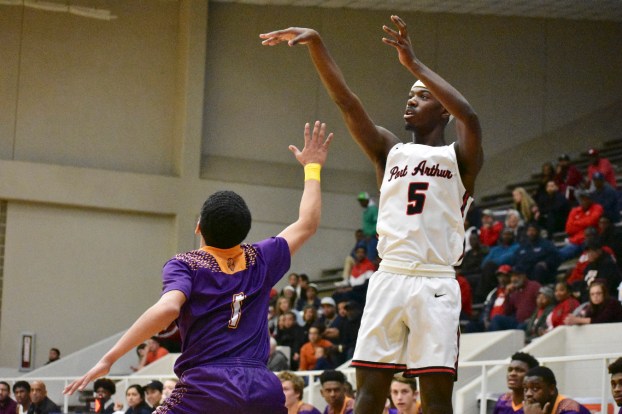 The storyline has repeated itself in the UIL 5A playoffs, but in Port Arthur it doesn’t get old.

When the Memorial Titans need to get a little more offense going, Kenneth Washington gets it going. A 43 percent three-point shooter for the season, the 6-foot senior averaged 10 points per game in the Titans’ three playoff wins, with all of his points coming from outside the arc.

No matter when Washington takes the court, he enjoys his role. It may help him gain the attention of the basketball coaches at Missouri Valley College, where Washington — a wide receiver — is signed to play football.

“I was talking to the [football] coach about it,” Washington said of trying out. “I like basketball more than I like football. When I was young, I used to see beautiful game winners. I just have the love for the game. Ray Allen is my favorite player, so I used to always watch him.”

The potential for Washington to become a game-changer has always been there from the time he was in middle school, in the eyes of first-year Memorial head coach Alden Lewis.

“He had the potential to be good,” Lewis said. “He was just waiting and now he is producing.”

That’s what 30 minutes to an hour of shooting before and after practice, by Lewis’ estimation, does for Washington.

“That’s what it takes if you want to be good and great at what you do,” Lewis said.

The second quarter may have become Washington’s favorite period the past two games. Against Shadow Creek last Friday, Washington shot 3 of 4 from three-point range in that period, and the Titans dug from 12-8 down to a 23-18 halftime lead, en route to a 46-36 win in La Porte.

Washington simulated that performance Tuesday when Memorial (27-7) trailed Houston Madison 32-21 at the Aldine ISD’s M.O. Campbell Center. He made 3 of his first 4 attempts from outside, as the Titans pulled within 36-33 at halftime.

Washington finished 5 for 8 from the arc, but his three-pointers ignited a 20-2 run that carried into the third quarter and set Memorial’s sails to an 86-69 win. He’s bettered his 8-point per game average in the past two games.

“I just love when my guard look for me and catch me open all the time,” Washington said. “I like that.”

With that feeling, the Titans are still going, four more wins away from repeating as state champions.

“And the biggest part of it, he’s doing his job, along with all my other players,” Lewis said. “We preach every day, do your job, and if everybody does his job as individuals, we only can be better as a team.”

HOUSTON — Leave it to Kenneth Washington Jr. to turn a game around. Much like he did against Shadow Creek... read more