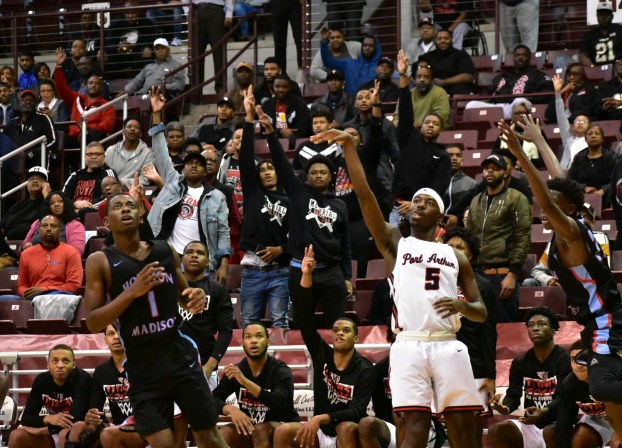 Kenneth Washington Jr. of Memorial shoots a three-pointer as Ronald Harleston of Madison looks on in the second half Tuesday in Houston. Washington made 5 of 8 three-pointers • I.C. Murrell/The News 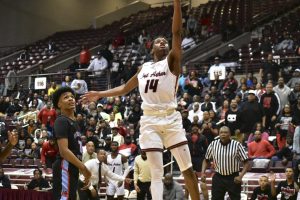 Amaree Abram of Memorial drives past Kevon Green of Madison for a layup in the second half Tuesday in Houston. (I.C. Murrell/The News) 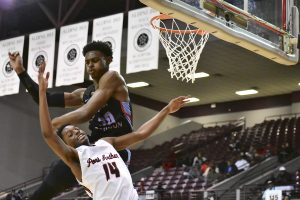 Tim Moore Jr. of Madison rejects a shot by Amaree Abram of Memorial in the second half Tuesday in Houston. (I.C. Murrell/The News) 2-27-19 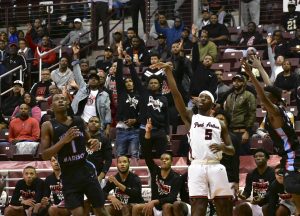 Kenneth Washington Jr. of Memorial shoots a three-pointer as Ronald Harleston of Madison looks on in the second half Tuesday in Houston. Washington made 5 of 8 three-pointers • I.C. Murrell/The News

HOUSTON — Leave it to Kenneth Washington Jr. to turn a game around.

Much like he did against Shadow Creek on Friday, the senior came off the bench to lift Memorial’s offense from the perimeter. His five three-point baskets and Steven Wilson’s 18 points led the Titans to an 86-69 victory over Houston Madison on Tuesday in a UIL 5A Region III quarterfinal at the Aldine ISD’s M.O. Campbell Center.

“It felt the same,” said Washington, who scored all 15 of his points on three-point baskets Tuesday. “Green light, again. Coach said, ‘Nope, go back in there and make some shots.’ We need you right now.”

Said coach Alden Lewis: “He was the turning point. He gave us the boost that we needed. We came out a little flat, but he gave us that energy and that punch we needed to sustain and get the victory.”

Memorial (27-7) will be back at the Campbell Center on Friday to take on Pflugerville Connally, a 55-47 winner over College Station, at 6 p.m. Friday. Manor and Fort Bend Hightower will play in the second semifinal at 8 p.m.

Madison, the District 23-5A co-champion, finished the season 18-12 despite 17 points from Kylon Bryant and 15 from Tim Moore Jr.

The Titans had never been to the fourth round of the UIL playoffs until winning the 5A state championship last year. Now, they’ve reached the Region III final four a second straight time.

Washington knocked down 3 of 5 three-point attempts in the second quarter, willing the Titans from a 32-21 deficit to within 34-33 in a span of 3 minutes, 6 seconds. Ronald Hardeston snapped that rally with a drive to the basket, however, fashioning Madison’s lead at 36-33 at halftime.

“We played our game,” Wilson said. “We got the ball out, and in our half-court, we got shots from Kenny [Washington].”

The game was not without chippiness down the stretch between the two teams. Emotions boiled over as both teams exchanged handshakes as well as some jawing, leading security guards to separate them.