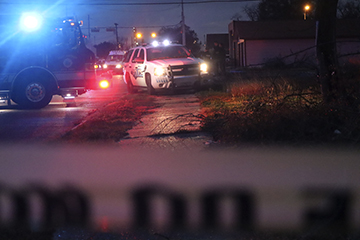 FILE PHOTO — Police and first responders at the scene of an officer involved shooting in the 1600 block of Kansas on Dec. 28, 2018.

A Jefferson County grand jury has declined to take action against a Port Arthur police officer in an officer involved shooting that happened Dec. 28, 2018.

According to earlier reporting, an officer attempted to stop and detain a man — later identified by family members as Shayne Lyons, 35, in the 1600 block of Kansas that was carrying a large weapon. The officer got out of his patrol car and asked the man to drop the weapon and he did not comply as he continued towards him. The officer feared for his life and fired several rounds from his service revolver striking the man.

Emergency medical services were called but the man died from his injuries.

A 2002 graduate of Abraham Lincoln High School, Lyons earned a football scholarship to Prairie View A&M. He had been employed as a manager at a Family Dollar store and worked at a warehouse before he quit to take care of his mother, who was elderly and disabled, his brother Andre Molo said in a story that ran in the Jan. 12 edition of The Port Arthur News.

Police did not release the name of the officer involved in the incident nor did they give details on the type of weapon he was carrying. Lyons’ brother Molo confirmed to media the weapon was a machete, which is not illegal to carry in the openly in the state of Texas.

In a press conference earlier this year Jefferson County District Attorney Bob Wortham said Lyons was carrying a pack of cigarettes that tested positive for PCP.

The case was investigated by the Texas Ranges who are a part of the Texas Department of Public Safety.

Several calls were made to the Port Arthur Police Chief but were not returned by 6 p.m. Tuesday.

Fences are up, water lines installed and ticket booths in place for Mardi Gras Southeast Texas. The event, now in... read more