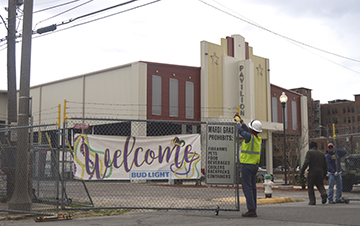 A worker installs fencing at Waco Avenue on Monday in preparation for this year’s Mardi Gras festival. Mary Meaux/The News

Fences are up, water lines installed and ticket booths in place for Mardi Gras Southeast Texas.

The event, now in its 27th year, kicks off Thursday and runs through Sunday in downtown Port Arthur. 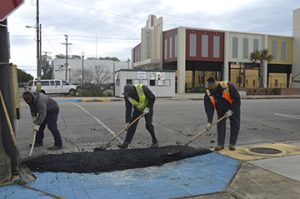 Over at Procter Street and Waco Avenue under overcast skies Earl Brown Sr., Harold Hatch and Jeff Green worked to create an asphalt ramp over water lines while down the street, near the police station, a fence was set in place. 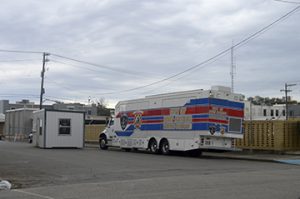 The city of Port Arthur’s Mobile Command Unit is in place and ready for this year’s Mardi Gras.
Mary Meaux/The News

Law enforcement will be out in force for the event, which draws thousands. The Port Arthur Police Department’s Mobile Command Center was parked on Beaumont Avenue at Procter Street on Monday and work schedules completed that will put more than 300 law enforcement officers in place over the four-day event.

There will be bicycle patrols with the parades, perimeter officers in vehicles and during parades and more.

Blitch thanked Jefferson County Sheriff’s Capt. Reggie Boykin, who handles the line-up of deputies along the parade route and Sgt. Luther Bracken, who coordinates the floats at the end of the parade to the Port of Port Arthur.

“Our main goal that we share with Mardi Gras Southeast Texas is that we want this to be a safe family event,” Blitch said. “Never in the 27-year-history have we had any serious issues.”

The Sheriff’s Office, he said, plays a pivotal role in security outside the gates and has done so since day one.

Blitch offered a few safety tips for the upcoming event:

Blitch said they are the lifeline to anyone they need.

More fun than ever before: Re-established Taste of Gumbo declared success

There was a lot of gumbo tasting going on Saturday and it was all for a good cause. About 1,200... read more