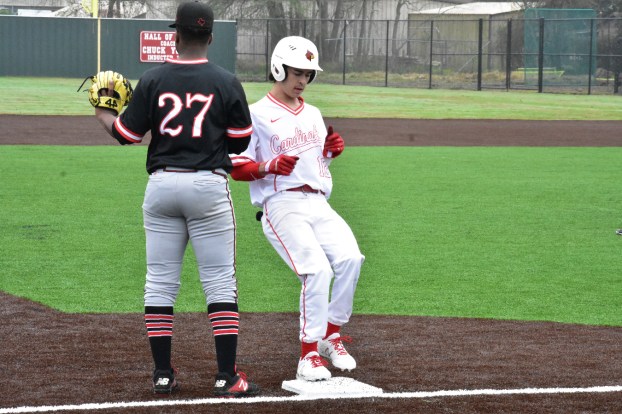 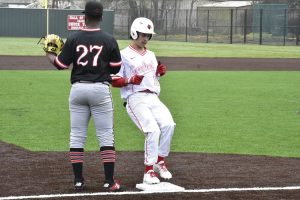 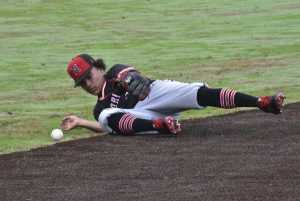 Emmanuel Garcia of Memorial dives for a ground ball against Bridge City on Thursday in Bridge City. Chuck Young Field at Bridge City is natural grass in the outfield and installed turf in the infield. (I.C. Murrell/The News) 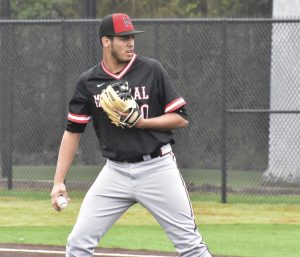 Adler Kithler of Memorial winds up for another pitch against Bridge City in the fourth inning Thursday in Bridge City. (I.C. Murrell/The News)

BRIDGE CITY — Chuck Young Field is officially open for business, and Bridge City took care of just that in the baseball complex’s debut.

“It rained on us all night and in the morning, but we knew the field could hold it,” coach Chad Landry said. “… We played pretty good. We know we’re going to have to play better. But it was good to get out of here and get after it.”

Leadoff man Cameron Yadon went 3 for 4 and scored three runs as Bridge City opened its Cardinal Classic on a cold and cloudy Thursday with an 8-2, six-inning win over Memorial.

Brudge City then beat Orangefield 3-2 in 5½ innings. The games were played with an 1-hour, 45-minute time limit.

“Being the first game out here and taking the dub [W for win] against Memorial High School, it feels great getting that 8-2 win,” Yadon said. “I felt good today, seeing the ball well and getting ahead in the counts, swinging at anything close, basically, staying aggressive at the plate.”

It was also the season opener for the Cardinals (2-0). Buna and Nederland were to play the late game.

Freshman Emmanuel Garcia hit 2 for 3, Jeremiah Fielder smashed a double and Tony Brooks lined a single for the Titans (1-1).

Memorial was coming off a 19-7 win at Hamshire-Fannett on Tuesday, but Bridge City posted a five-spot with three hits off Memorial starter Josue Rodriguez in the first inning. Yadon scored his first run on a dropped fly ball, Jackson Tims (single) and Gavin Green (sacrifice fly) each drove in a run, and Peyton Havard sent two runs home with a single in the nine-batter inning.

“Today, they put the ball in play,” Titans coach Jessie Riojas said. “We kind of kicked the ball around in the first inning and pretty much gave them five runs. They capitalized on it. And then, they pitched and threw strikes. What I liked from my group is that we didn’t quit. We kept battling, going inning by inning, carrying the momentum from one inning to the next.”

Green struck out six Titans and walked two in 3 2/3 innings, holding Memorial to one hit. Tanner Wilson came on and gave up one hit in one full inning, and Ryan Ellis threw 1 1/3 innings of two-hit ball with a strikeout.

Rodriguez struck out two for Memorial. Adler Kithler scattered two runs on four hits in three innings, and Van Ellas came on for the last two innings, allowing a run on three hits.

“Those three we ran out today, those are three of our starters,” Riojas said. “We’ve got a couple more we can run out to. We’re just kind of getting our endurance back up to where it needs to be.”

Wilson stole home plate with two outs in the Cardinals’ fifth to take the lead for good.

Orangefield (0-2) had five hits to Bridge City’s four, each hit by a different player. Jaxon Bernard and Peyton Havard batted in runs for Bridge City, while Orangefield went without an RBI.

Havard scattered two earned runs on five hits over five full innings and struck out two for the win. Logan Hamm threw a perfect top of the sixth inning.

Noah Gregory threw eight strikeouts, and Landon Hiltz drove in two runs batting 1 for 1 as the Bulldogs (1-1) routed the Cougars.

While raising awareness of breast cancer, Lamar went pink and reached a milestone in its home winning streak for women’s... read more