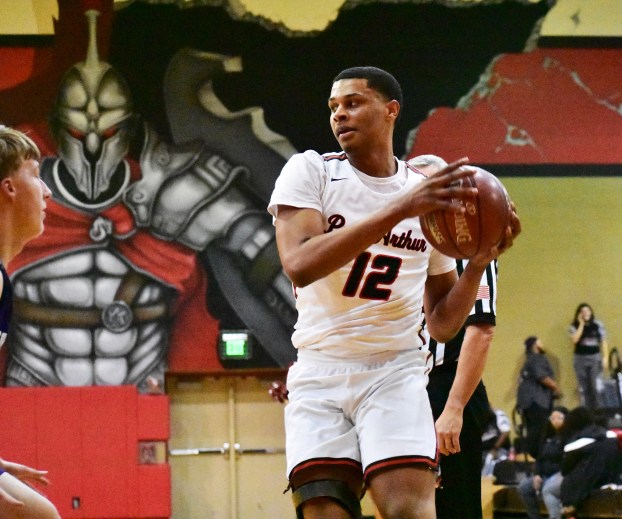 Keigan Kenney of Memorial starts to drive to the basket against Dayton on Feb. 5 in Port Arthur. (I.C. Murrell/The News) 2-5-19

• Regardless of the outcome of Friday’s tiebreaker, Barbers Hill and Memorial will play a doubleheader at Pasadena ISD’s Phillips Fieldhouse on Tuesday.

Barbers Hill will play at 6 p.m. and Memorial will follow at 8. The winner of their tiebreaker game for the No. 1 seed will take on Crosby, while the loser will meet Galveston Ball.

“A long one,” the senior said. “I came a long way, and I’m just happy to be able to get back on the court.”

Before another question was asked, Kenney had already fathomed the difficulty of the comeback road.

“It was devastating,” he said. “I was kind of depressed, watching all my bros play.”

Keigan Kenney spent two seasons trying to come back from an ACL tear. He's back but he's always been a @PAMemorialBB Titan. pic.twitter.com/DNd1no6VPN

Granted, the Titans achieved a lot with the 6-foot-5 forward sidelined, like winning the school’s first team state championship in any sport last year. But Kenney, among others, figured he would be among the on-court contributors.

His classmate, starting point guard Armand Callihan, remembers the player Kenney showed he could be on the varsity level.

“Our sophomore year, he was able to do everything on the court,” Callihan said. “He could shoot. He could dribble. He could post up. He could make plays from anywhere from the court, from the post, top of the key, wing. … He did it our freshman year, when we won district in 6A, which is the highest level.”

Then came the adversity.

He sustained his first ACL tear that October and missed the entire season. The Titans, who had just dropped to Class 5A, reached the Region III quarterfinal round.

Kenney said his doctor allowed him to play on the injured knee for summer ball on a limited basis. That’s when the injury struck again.

“I was in Vegas, playing AAU,” he said. “It probably wasn’t strong enough, but my doctor wanted me to see if it was OK for me to play. He just wanted me to play a few minutes. That was it. Things happen.”

ALWAYS PART OF THE TEAM
Kenney was in San Antonio last March, seeing Memorial take down Justin Northwest in the 5A state final. He just had yet to take the court as a varsity Titan.

“He was always an important part of the team, whether it was traveling, helping out with practice or just being around his peers, which I though was good for him because most people, when they get injured, they want to shut it all down and go home,” Titans coach Alden Lewis said.

“But the fact that he stuck around for two hard years, that just tells you how big of a person he is.”

And now, Kenney “is back,” Callihan said.

“He’s not the player he used to be, but every once in a while, he’s able to revert back to his old self,” Callihan continued. “I don’t know how, but he does it. It means a lot to play with him. I’ve been playing with him since middle school. To put on the same jersey and play with him every day is a good feeling.”

Kenney was cleared in time for the current school year, and he’s made the most of the time he’s seen on varsity with averages of 5 to 6 points and 8 to 10 minutes per game.

“Keigan’s always been a sharp student,” Lewis said. “He always made good grades [and is] a model student, but the best part about it, coming back from the two injuries he had, he’s coming back with a stronger mind.

“He’s taken a little while to get back in form, but the mentality he has and trusting his knee and wanting to play is tremendous.”

Following high school, Kenney will have an academic career waiting, with computer engineering the likely major.

Kenney hasn’t ruled out trying out for a basketball team wherever he goes to college. He’s just preparing for life after hoops.

“Things can be taken away from you quickly,” Kenney said. “You can’t take it for granted.”

The more Nathan Bailey was feeling his shot, the more he shimmied down the court. That’s a sign the redshirt... read more