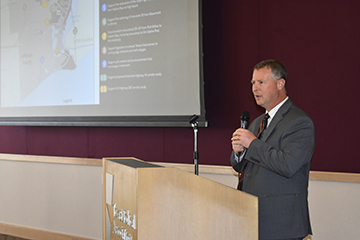 Tucker Ferguson, Texas Department of Transportation-Beaumont district engineer, addressed a group of delegates from Jefferson and Orange counties during Golden Triangle Days in Austin earlier this week while speaking on a list of transportation related issues. Mary Meaux/The News

Tucker Ferguson, Texas Department of Transportation-Beaumont district engineer, addressed the group during the biennial convention earlier this week while speaking on a list of transportation related issues.

A lot of the time the ‘wish lists’ of key issues are expensive and difficult to attain. In this case 11 issues were submitted and Ferguson said he was happy to say TxDOT is making progress.

Here’s a look at some of the issues:

Ferguson said he is not sure what the new, updated cloverleaf will look like but the cost is around $65 million.

In the past he was asked if there are any other cloverleaf’s designed quite like this one and the answer is yes, there is one in San Antonio.

Erosion, tides and several hurricanes have changed the alignment of the roadway, which is now in the water, thus halting any development on restoration of the Beach Road, as it is known locally.

A causeway would also be out of the question due to the many environmental issues. Plus, there would be the need for beach entrances.

As far as the road from Port Arthur to Sabine Pass is concerned, emergency construction work is underway to repair damage from Hurricane and Tropical Storm Harvey. Sheet piling and rock berm are being placed along the road and the project is 30 to 35 percent complete.

Port Arthur Mayor Derrick Freeman offered thanks for the upcoming work on the cloverleaf, calling it a “death trap.”

His concern is that the road needs to be prioritized in light of the multi-billion dollar work slated at area liquefied natural gas plants.

One of the facilities has a plan to move Texas 87 over, which could help.

Freeman also spoke of the importance of the roads which lead from Port Arthur on up north and how the U.S. 287 corridor could allow LNG to be trucked up toward Canada.

Krewes, it’s that time of the year ago so toss us your photos

It’s time to let the good times roll. The Port Arthur News wants your krewe’s photos to be included in... read more