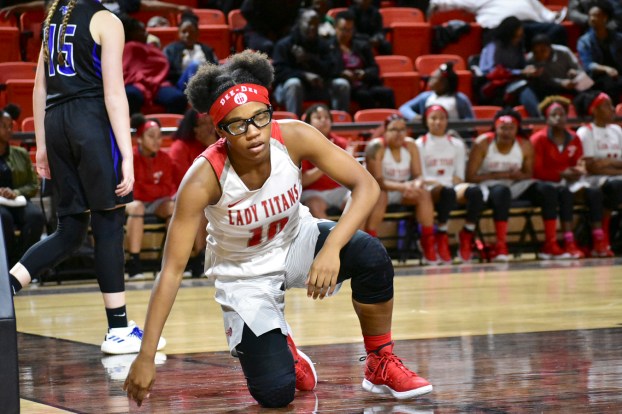 Denisha Anderson of Memorial rises off the floor during the third quarter against Friendswood on Tuesday in La Porte. (I.C. Murrell/The News) 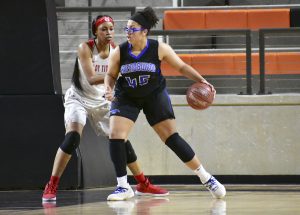 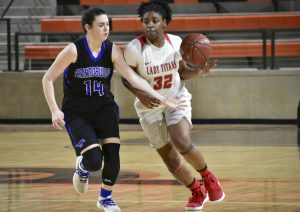 Jackie Gibbs of Memorial handles the ball against Kinsey Cole of Friendswood on Tuesday in La Porte. (I.C. Murrell/The News) 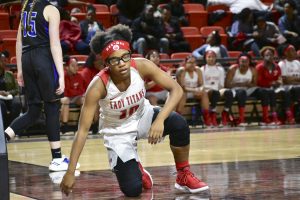 Denisha Anderson of Memorial rises off the floor during the third quarter against Friendswood on Tuesday in La Porte. (I.C. Murrell/The News)

LA PORTE — With 6:16 remaining, the Memorial Lady Titans had narrowed what was a 13-point lead down to one, and this battle of district co-champions hung in the balance.

That was until District 22-5A tri-champion Friendswood made one last run.

The Mustangs went on a 13-4 run to close out a 42-32 victory Tuesday in the Lady Titans’ first bi-district appearance in three years. Memorial finished the season 17-12.

“Hopefully for the girls coming back, they realize that it’s a game for 32 minutes, and you’ve got to put the work in,” eighth-year Lady Titans head coach Kevin Henry said. “For them, it’ll start now after this loss. … For those who are seniors, try to keep working to get them to the next level.”

Sophomore center Ashlyn Mason had 14 points and eight rebounds, four of them on the offensive glass, to lead Friendswood (22-8), which will take on Manvel in the second round.

“They crashed the boards hard on us,” Henry said. “They were able to get second and third opportunities. That kept them with a little lead, and, you know, when you give people second and third chances, that usually ends up with a big play.”

Memorial earned a share of the 21-5A championship, its first district crown since Henry’s first season at the helm in 2012, but drew Friendswood after losing a tiebreaker game for the No. 1 seed to Barbers Hill on Friday in Vidor. An unlucky coin flip dropped Friendswood to the No. 3 seed after sharing 22-5A with Goose Creek Memorial and Galveston Ball.

Crosby took on Barbers Hill here later Tuesday in hopes of a 22-5A sweep.

Senior center Julia Sion had nine points and eight rebounds to lead the Lady Titans in her second UIL playoff. She was a freshman at a 6A school when the team last went to the playoffs.

“We were determined to win this game and that’s what led us to push farther and get us as close as possible in hopes of winning,” Sion said, still processing the emotions of defeat in her last high school game.

Memorial trailed 20-11 at halftime after shooting 5 of 28 from the floor, but Friendswood wasn’t warmed up, either, going 7 for 24. A 10-2 run going into the third quarter did get the Lady Titans back in the game.

“I think the tide kind of turned when they started being aggressive,” eighth-year Friendswood coach Daron Scott said of Memorial. “They were tough on the glass, they got second and third opportunities, and they cashed those in. And I think that second and third quarter, we weren’t very aggressive, but we kind of got our poise back, and that kind of made the difference.”