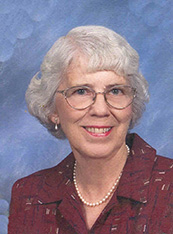 Gwendolyn “Gwen” Hope Chapman Gaspard, 90, of Port Arthur passed away on Thursday, February 7, 2019 at her home.

She was born on April 8, 1928 to her parents, John Allen Chapman Sr. and Ruby Belle Vaughan Chapman in Port Arthur, Texas. Gwen has been a lifelong resident of the area. She worked as a secretary at the Gulf Refinery for over 15 years, then worked as a secretary for Port Arthur Independent School District for 12 years. Gwen was a member of Calvary Baptist Church in Port Acres.

She was preceded in death by her parents, her husband of 70 years, Leonard J. Gaspard, her brother, John Allen Chapman Jr. and her sister, Geraldine “Jerry” Philen.

Gwen is survived by her son, Ned Gaspard and his wife, Deann of Bridge City, her daughter, Angela Hunt and her husband, Gerald of Houston, four grandchildren, Justin, Jordan and Jared Boynton,  Belle Gaspard, four great grandchildren, Hudson, Logan, Leo and Addison. She is also survived by her sister, Golda Chapman King of Beaumont and numerous nieces and nephews.