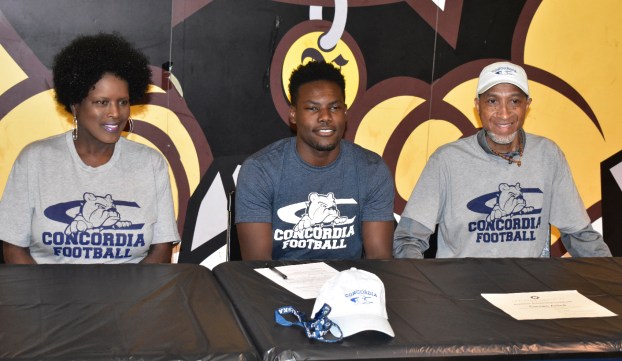 Carsen Arline of Nederland is flanked by his mother Pearline and father Johnnie after signing a letter of intent with Concordia University of Nebraska on Wednesday. (I.C. Murrell/The News) 2-6-19

Arline landed a scholarship to Seward’s Concordia University, Nebraska, and signed a letter of intent with the Bulldogs on Wednesday, the first day of the traditional signing period for football.

“I didn’t think there was a lot to do out there, but I felt like I was at home,” he said. “I have some family up there, so I’m not leaving much behind but just my mom and dad. I love them a lot. I’m just blessed to be able to play football at the next level.”

Concordia competes in the NAIA and the Great Plains Athletic Conference. The Bulldogs finished 3-7 last season, but produced six All-Americans since 2012.

Nebraska is not the farthest college destination from Nederland were the Bulldogs have sent a player that second-year head coach Monte Barrow can remember. Running back Troy Benjamin committed to a college in Minnesota, he recalled.

Arline became a consistent deep threat for the Bulldogs, who started the season 9-0 and made it the area round of the 5A Division II playoffs. He had a 24-yard catch from Bryce McMorris down to the Fort Bend Willowridge 4 that pulled the Bulldogs within two points early in the fourth quarter of their home bi-district round game, which Nederland pulled out 22-16.