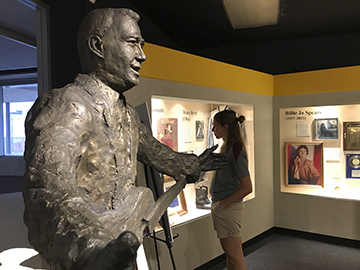 The Big Bopper's statue at The Museum of the Gulf Coast. The 60th anniversary of the death of the Big Bopper J.P. Richardson, Buddy Holly and Ritchie Valens's death was on Feb. 3. Ken Stickney/The News

The two were friends in mixed choir at Beaumont High, where Jiles Perry Richardson Jr., born in Sabine Pass to an oilfield roughneck and his wife and raised in Beaumont, served as choir president and oftentimes sang alongside Meehan, then a sophomore. 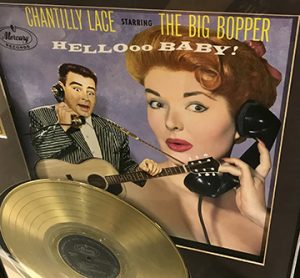 A gold record of ‘Chantilly Lace.
Ken Stickney, The News

Meehan and J.P. took divergent but successful paths over the next decade in the music and entertainment industry. Richardson, a rugged football player, left Lamar College for a local radio career, shedding his shy demeanor for larger-than-life, on-air radio personalities. He played the guitar and sang, too, wherever he could. And he wrote songs — country, rock-a-billy, bebop. Because he was a big guy, he assumed the role of the Big Bopper on Beaumont radio, one of many characters he assumed during radio shifts.

Meehan left Lamar for New York City, first singing and later turning to the behind-the-scenes work of mixing and sound engineering, working with some of the biggest names in music for many years. Like Richardson, his career was temporarily delayed by military service in the ’50s.

At graduation, Richardson signed Meehan’s copy of the 1947 Pine Burr, the yearbook. The inscription remains today: “Don, you’re a swell singer, musician and guy. You’ll do good at BHS, I know. JP” 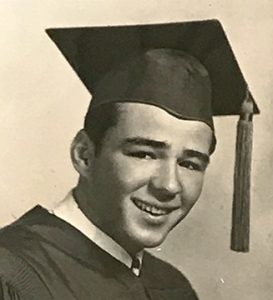 They both met again, too, in New York when the Big Bopper, riding high on the music charts with his signature hit, “Chantilly Lace,” was preparing for an appearance in New York. Meehan helped him with some arrangements.

Months later, Meehan’s manager delivered the bad news to him on Feb. 3, 1959 — 60 years ago Sunday. J.P., his friend, had died with rising stars Buddy Holly and Ritchie Valens in a frozen Iowa field, victims of an early morning plane crash. Recollecting that morning this week, Meehan fought back tears.

Sam Monroe, former president of Lamar State College Port Arthur, remembers those days well. He took his own turns as a disc jockey in Port Arthur, starting at the age of 13. He worked at KPAC, a 5,000-watt radio station owned by Port Arthur College. The Big Bopper, then at 990 on the dial, was “our competition” — and he was good.

Richardson had returned from the Army in 1957 to pull publicity stunts like his “Disc-a-thon,” when he spun records at the Jefferson Theatre for 122 hours and 8 minutes in the lobby. Crowds gathered for five days to watch The Big Bopper as he played 1,821 records; when he ended his marathon shift, he was taken to Baptist Hospital on a stretcher. Some 2,000 people came to the theater to watch.

“We were competitors,” Monroe recalled of those heady days as a teenager. “We didn’t fraternize with the competition.”

Richardson was more than competition. He was a consummate showman, a radio carnival barker yet a creative force whose greatest feats may have come in the quiet moments when he wrote hit songs for himself and for others: “White Lightning,” George Jones’ first No. 1 country hit. “Running Bear,” a global No. 1 hit for Johnny Preston of Port Arthur — Jones and J.P. sang back-up — and a decade later a No. 1 country hit for Sonny James. His “Chantilly Lace” became a hit first for him — 22 weeks on the charts, reaching No. 6 — and later for Jerry Lee Lewis in 1972, reaching No. 1 on some country charts. “Chantilly Lace” was the third-most played song of 1958.

But at his death his hometown newspaper used this headline, which might have made perfect sense in Southeast Texas on the “Day the Music Died”: “Big Bopper, 2 other popular singers die in Iowa plane crash.”

So how did the shy Richardson blossom into the Big Bopper? Some of it might be because of his young marriage to Adrianne Fryou — “Teetsie” to her Louisiana Cajun family and friends — who met J.P. after moving to Beaumont to help her pregnant sister. She had heard him on the radio; for their first date, they ate gumbo together, the Bopper’s biographer, Tim Knight, wrote in “Chantilly Lace, The Life and Times of J.P. Richardson,” published by The Port Arthur Historical Society in 1989.

Two months and 18 days later, they married at St. Anthony’s in Beaumont. Reserved and shy, Richardson became a devoted husband with a young wife and, soon enough, a young family to support. His Army service was accomplished in Texas, affording him frequent visits with his wife and later a daughter, both of whom he adored. His son was born after Richardson died. Raised in a working-class Beaumont neighborhood, he was determined to provide for them.

Knight wrote that the emergence of “novelty songs” on the radio provided Richardson with some opportunity. Richardson’s “The Purple People Eater Meets the Witch Doctor” was written and recorded as such a novelty song, but what to put on the record’s flip side?

Monroe said Marge Hall, the wife of Bill Hall, Richardson’s manager, recalls this story: The Halls and Richardson were driving from Beaumont to Houston on Highway 90 and discussed what to put on the flip side. A Hank Williams song was suggested; everyone loved those. But Hall and J.P. discussed a concept for another song the Bopper had in mind: It was about “a guy talking to a chick on the telephone.” Marge Hall told Monroe that “Chantilly Lace” was completed before they reached Houston. Then Richardson, who was car sick, swapped seats with Marge, who’d been riding in front.

By 1958, The Big Bopper was a household name, touring with the likes of pop stars like Frankie Avalon and Connie Francis. Other DJs were spinning his records. On Jan. 23, 1959 Richardson started the Midwestern tour in Milwaukee that was scheduled to end in Springfield, Illinois on Feb. 15. It was, critics said, the “tour from hell,” with mechanical breakdowns, frosty weather and haphazard scheduling. Richardson, Buddy Holly and Ritchie Valens boarded a single-engine plane in Mason City, Iowa, with a 21-year-old pilot, destined for Moorhead, Minnesota. The hope: They could get their clothes washed and Richardson, sick with the flu, could rest. The plane crashed five minutes after takeoff. Richardson, wearing a red-checked flannel shirt and light blue cotton pants, was thrown a hundred feet from the crash site, and died with a $36 receipt from Dwyer Flying Service in his pocket. He was 28.

Tom Neal, director of the Museum of the Gulf Coast, said plans were made for a 30th anniversary observance of the tragedy in Port Arthur, where the Southeast Texas Music Hall of Fame, forerunner to the museum, was to open at the Gates Library.

Waylon Jennings, who played with Holly and gave up his seat on the plane, sent a telegram that reads: “It was a great loss to all of us when they died, but just think of what a loss it would have been to the world if they had never lived.”

That messages rests in Richardson’s display case at the Museum of the Gulf Coast, near a telegram sent by Colonel Parker and Elvis Presley two days after the crash. Don McLean, who wrote “American Pie,” which included the words “the day the music died,” sent his own message: “This was the day the music died, for me and for many others, and honestly, it has never been as beautiful or as much fun since.”

Nearby, the Bopper’s bronze bust, crafted by Doug Clark, seems to welcome visitors into the music gallery.

Monroe said this week that Richardson’s place in music history is surely underappreciated. More than a novelty act, the Big Bopper was an accomplished songwriter whose music stood the test of time.

“He is significant because of the songs he wrote,” Monroe said, both his own hits and hits covered by others.

“‘Chantilly Lace’ has held up,” he said. “It has standing in the history of popular music.”

The Big Bopper still has standing in Southeast Texas, too, our link to the day the music died.

Associated Press PLANO — A Dallas-area man has been sentenced to 60 years in prison after impregnating an 11-year-old girl.... read more