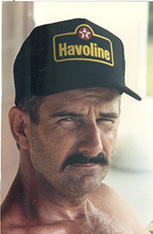 Louis Charles Havens of Nederland, TX passed away under hospice care at Harbor Hospice Hospital in Beaumont, TXon February 1, 2019. He was 71 years old.

Louis was born November 8, 1947 in Port Arthur, TX.  He graduated from Thomas Jefferson High school in 1966and attended Lamar University in Beaumont, TX. He was a member of Lakeview Methodist Church.

Depending on which family member or friend he was with at the time,he was either called Louis, Louis Charles (mostly on those occasions where he agitated someone – usually his mother, his wife, orone of his sisters), L.C. or Big Lou (although “Little Louie” outgrew “Big Louie” a long time ago).

Louis was hired by Texaco Refining in 1968, but was soon drafted into the United States Army. He proudly served our nation for six years. Much of his service time was spent in Germany during the Vietnam War era..

He returned home and resumed work at Texaco.  He experienced the modernization of the petrochemical industry andsurvived its many strikes and ownership changes.  He retired in 2010 from Afton after 43 years of service.  He was a proud and dedicated union member of the OCAW and later PACE and then the USW.  He stressed the importance of union membership and working class values to his children, both of whom carried on his legacy of union involvementin their respective professions as a Port Arthur Firefighter and Port Arthur Police Officer.

Louis loved the beach and in his youth proudly helped his father, uncles, and grandfather build the family beach cabin located in Port Bolivar, Texas. He grew up fishing, crabbing, beach combing and swimming with his two sisters and several cousins.  He shared his love for the beach with his own family and friends.  He taught his children and their friends to water ski, fish, shrimp and crab. He always shared the catch of the day with whomever was in the boat.

Louis enjoyed hunting in his early years with friends and family in East and South East Texas.  He passed along that love to his children and grandchildren.  He also enjoyed collecting coins and patches and was a CB and Ham Radio enthusiast.

Louis was both a craftsman and a mechanic. Coming from a long line of carpenters and the son of an expert mechanic and woodworker, Louis carried on the long family tradition of “you break it, you fix it!”

A visitation of family and friends will be held on Monday, February 4, 2019 from 5:30 pm until 7:30 pm at Clayton Thompson Funeral Home in Groves, TX.  A private family service and burial will be held on February 5, 2019.