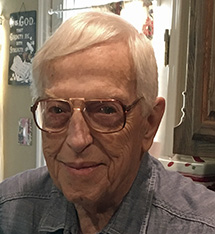 Bruce was born in Dickinson, North Dakota and knew at an early age that he wanted to see the world. When he was 15, he bought a used Indian motorcycle and headed South… in the winter. It was an adventure, and not one of the smartest decisions he ever made, he admitted this more than once, and no one disagreed. When he was 96, he literally, hopped in his Toyota van and headed to Arizona to visit friends. His kids sat at home and prayed for every person on the highway between southeast Texas and Casa Grande, Arizona!

Bruce was a WWII veteran. He served in the Coast Guard protecting troop ships and hunting enemy submarines in the North Atlantic. After the war, he became a radio officer in the Merchant Marine and traveled the world for more than 40 years.

Bruce was a faithful member of Wesley United Methodist Church in Nederland and had many friends in the Bible 101 Sunday School Class. A private family service will be held with Dr. Douglas Caldwell officiating. In lieu of flowers the family requests that remembrances be made to Wesley UMC, 3515 Helena Ave, Nederland, TX 77627 or Port Arthur International Seaman’s Center, PO Box 1646, 401 Houston Ave, Port Arthur, TX 77640.