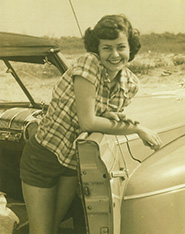 Beverly Smith Perkins Kirby, 82, of Orangefield, Texas passed away Saturday, January 26, 2019 at Bonne Vie in Port Arthur, Texas with her daughter and son-in-law by her side. She loved life every step of the way and although she fought with grace and her battle with cancer ended.

Mother attended Thomas Jefferson in Port Arthur where she was a Majorette for the Maroon and Gold marching band.  It was in this young season of life where she met a fine handsome photographer, our dad, Buddy Perkins.  And that is when their love story began.  They married on June 4, 1955, just a few days after mother’s graduation.  A marriage that held strong for 63 years.

Mother and Dad started a family and owned Perkins Photography Studio on Proctor Street in Port Arthur, Tx. Then in 1972 they decided to close the studio and moved to Orangefield.

After having to reconstruct their home from Hurricanes Rita and Ike. Hurricane Harvey took the home they built with their own hands and everything they owned. Even though they were unable to return to their home, they stayed strong and their love for one another never failed.

Retiring from Chemical Waste Management after 23 years of service she continued to live life to the fullest. She never met a stranger and loved to visit with anyone and everyone. She loved to meet with her old classmates and reminisce about old times.

Mother had one grandchild, Tryce.  He was the sunshine that brightened her days and she loved him more than life itself.  In her last days, when she wasn’t able to really speak, her eyes would still light up on his visits.

Mother was a member of Orangefield Church of Christ. She was also a member of the Business and Professional Women’s Organization and had a beautiful love for animals, especially her cat named Kitty.

A visitation of family and friends will begin at 9:30 AM Saturday, February 2, 2019 at Levingston Funeral Home in Groves, TX followed by a Memorial Service at 10:30 AM with Mr. Larry Tomlin officiating.

Special thank you to Ken Blanda and staff at Bonne Vie, Harbor Hospice, Complete Homecare, loving caregivers that have become like family and to the best neighbor anyone could have Gene Pate.